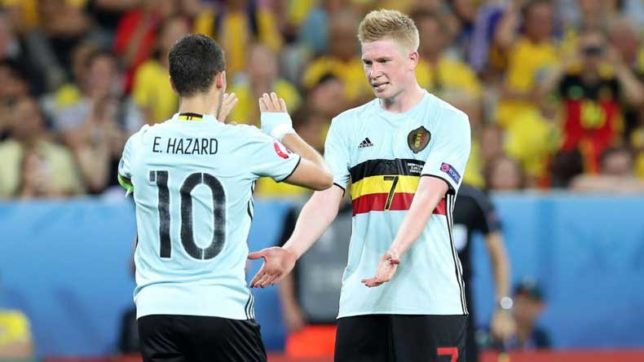 That Belgium are grouped with England and that they possess such a quantity of outstanding talent, much of which is based in the Premier League, has led to close examination of how exactly they have managed it.

Considerable praise has been lavished for their strategy in developing young players and there is recognition that the current crop is no fluke.

Their youth international teams are again performing strongly but nonetheless, there remains a feeling that if ever there was a time for the Diables Rouges to win a tournament, then it is now.

The current 28-man list is set to be trimmed by five after Friday’s friendly with Portugal.

From back to front Belgium will be capable of putting out an XI to match virtually anyone at the tournament and there are decent options on the bench too.

Key players like Alderweireld, Witsel, De Bruyne, Hazard and Lukaku throughout the spine of the team are in their prime years.

The decision to leave out versatile midfield dynamo Radja Nainggolan has been highly controversial.

The Roma man is of the opinion that the reasons are personal, though manager Roberto Martinez has claimed they were tactical.

Two forwards on either side of the Merseyside rivalry, Kevin Mirallas and Divock Origi, miss out due to lack of game time this year.

Martinez came as a bit of a surprise appointment given his lack of coaching experience outside of the Premier League when he took the reins after Euro 2016, but his side romped through the qualification process scoring goals for fun.

The 44-year-old is a likeable character that has usually received praise for his entertaining football, although his defensive organisation was often questioned in England.

A 3-4-2-1 was the choice for much of the qualification process as Martinez adapted to the talent available to him.

This means he can utilise three of his star centre-backs, likely Vertongen, Alderweireld and Kompany – and still have Vermaelen in reserve.

It also means the dearth of top quality full-backs is not an issue, as the likes of Carrasco and Meunier will operate as wing-backs.

Witsel plays a key role in midfield where he shields the backline and De Bruyne will look to control the game.

Mertens and Eden Hazard will support Romelu Lukaku up front, in an attack that offers a lethal combination of speed, trickery and strength.

While Hazard and De Bruyne are world-class talents, Lukaku as the spearhead may well be the most crucial this summer.

The Manchester United man was injured towards the end of the Premier League season but this could prove a blessing in disguise as it will have given him much-needed rest.

It is vital he is fit and firing as understudy Michy Batshuayi is also struggling for fitness and Christian Benteke has had a shocking season.

Good enough and versatile enough to replace either Kompany or Witsel in the side long term, the 23-year-old excelled domestically and in the Europa League last season.

Is widely tipped to follow many of his compatriots to the Premier League during the window and a good impact at the tournament would significantly elevate Anderlecht’s asking price.

Should comfortably reach the quarter finals where Brazil are potential opponents.

The ability is there to go further but progress seems unlikely as too many question marks exist over their big names.

Will Lukaku be match fit, for example? Can De Bruyne at last replicate his domestic form in an international shirt?