Anyone who’s heard all they can take about David Beckham/AC Milan/LA Galaxy needs to pour himself a drink, sit down and relax because this drama is just winding up. Settled? Good, because the stage is set for one scandal after another right through November 2009. Get comfortable.

Beckham commits to AC Milan till May, slips into the Galaxy bedroom through the July 15 transfer window, first exposes himself with Red Bulls July 16, plays AC Milan and Galaxy off against each other in LA July 19, trysts with Kansas City July 25, sleeps his way into MLS All-Stars at Rio Tinto July 29, taunts Stevie Nicol at the Revolution August 8, frolics through the rest of the season, and come November watches AC MIlan and MLS slap each other silly – all the while professing his heart belongs to the English national team, but confessing he’s fallen for a pristine MLS franchise and intends to raise their children together.

Then everybody (even non-smokers) has a cigarette.

The Beckham deal may be the sports media extravaganza of all time, one for the history books. For the tedious specifics of the contractual arrangements, there are dozens of bloggers who’ve spent thousands of hours analyzing speculative financial arrangements that will never see the light of day. Spend your time as you will.

AC Milan pays $1 million for the current two-month loan and will cover the next three months with another $3 million to be generated partly through visits from foreign teams and $2 million paid by Beckham himself. Beckham’s salary is paid by Milan, so doesn’t count against the Galaxy’s salary cap until he arrives, and then he’ll count $200,000 against it for the rest of the season. As part of the deal, AC Milan added a July 19 friendly with the Galaxy onto their three-game US tour, and the hype and rivalry will be off MLS charts.

On Sunday MLS Commissioner Don Garber claimed one of the “major deal points” of the negotiations was the modification of Beckham’s opt-out escape clause. “He had the right to just walk away,” said Garber. “Now he’ll have to buy himself out.”â€¨ So, if he leaves at the end of 2009, instead of just trotting off he’ll have to buy the remaining two years of his contract, valued as high as $11 million.

Garber says Milan met the terms of his “unique circumstances,” under which he’d negotiate after deadline. “We achieved that goal of having an unusual and extraordinary agreement,” said Garber. “We get a game in Los Angeles that will welcome David back. We have a new contractual agreement on how to manage his opt-out clause after 2009. And AC Milan and David Beckham have paid significantly for the extension of the loan.”

Beckham told the Sun, “I have a right to own an MLS franchise, which I will action immediately after I have stopped playing football.” If this was part of the “unique circumstances” rendering the deal palatable to MLS, it could be the most valuable part of the agreement. If the loss of Beckham’s presence for five months is this shattering to MLS, then the value of a club under his shadow and direction for years to come is priceless.

Beckham claimed he was pleased with the deal because “it allows me to continue my commitment to develop soccer in the United States, which is something I’m passionate about,” and “my family is happy and settled and will remain in Los Angeles.”

But it’s not all smooth sailing. Beckham is 33 and faced with a grueling year with two teams and international competition. One bad tackle and he’s out for the season. And the international matches could cut further into his time with the Galaxy. Beckham is eligible for two English friendlies in June and again in August. Bruce Arena pointedly stated, “I would request out of England that David not be called for the friendly in August.” 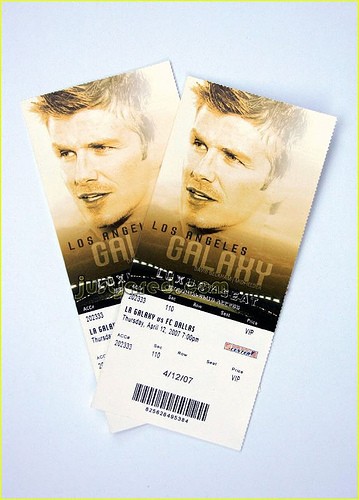 In light of Beckham’s absence, the Galaxy is rolling ticket prices back 10% and offering a refund on purchased tickets, even though Landon Donovan has returned and expected to begin training Tuesday. Both Galaxy attendance and ticket price increased by 25% when Beckham signed in 2007, and he remains their bread and butter. In the Beckham era, overall MLS attendance rose 7% and ESPN ratings on Beckham games rose 23%. In 2008, Beckham notched five goals and ten assists with LA and in two months scored twice for Milan, now going 4-2-3 with him onboard.

Donovan scored a career high 20 goals in 2008 and is considered the best US striker, but Bayern Munich gave him his walking papers after his winter visit. Regarding his release, Chairman Karl-Heinz Rummenigge awkwardly said, “we believe that a fourth player should be a young player with good prospects.” Donovan is quite a bit more than a prospect and will likely pair with Edson Buddle in Beckham’s absence.

Beckham’s stated goal, to “help Milan to reach the Champions League and for the LA Galaxy to make the playoffs and to win the MLS Cup,” is ambitious, but not entirely plausible considering the Galaxy’s comfortable berth at the bottom of the table last year. They could be right at home there in 2009, too.

So, those who say, “Glad it’s done, let’s move on,” are going to be very disappointed. That day is not going to come this year. This summer will be an all-out Beckham onslaught as MLS and Beckham squeeze minutes out of marketing to make up for the games. So to complete the metaphor, you might as well relax and enjoy it.

The MLS Players Union released the 2009 player salaries (PDF) that reflected increases in the salaries of top players and rookies, intended to keep the best talent in MLS. Less fortunate were the mid-range journeymen players.

The Puerto Rico Islanders beat Marathon 1-0 March 4, and steamed ahead with three other Mexican teams to a spot in the CONCACAF Champions League semi-finals. Nicholas Addlery scored the goal. Colin Clarke, former coach of FC Dallas, manages the team, composed of MLS rejects, college players, Puerto Rican nationals, and a guy from an Italian reality television show. They face off against Cruz Azul March 17 in the semi-finals. Santos will play Atlante, that defeated the Houston Dynamo 3-0.

How a lower league surpasses MLS in this tournament defies the reasoning of many, but it is possible, considering the league structure in the US. USL-1 Montreal Impact also outlived DC United, NE Revolution, and Chivas, only falling 5-2 to Santos Laguna in the final round. Salaries for USL players range up to $5,000 a month, beyond even some first team players in MLS.

The US women’s national team clinched first place in Group B and advance to the finals of the Algarve Cup this Wednesday. Natasha Kai scored the lone goal in the last minute of regulation time in the 1-0 win over Finland. WNT, led by Pia Sundhage, earlier beat Denmark 2-1 with goals by Angie Woznuk and Tina DiMartino. The WNT have won the Algarve Cup two years in a row.

The U-20 men beat Jamaica 3-0 in the World Cup qualifers with goals by Peri Marosevic, Dilly Duka, and Billy Schuler. The U-20s, under coach Thomas Rongen, then drew a scoreless tie with Honduras, so the decision against El Salvador this Wednesday determines if they move on.

With Barca out, four cities vie for two MLS franchises

Vancouver, Portland, St. Louis, and Ottowa are sparring over rights to the next two MLS franchises, to play in 2011. The franchises have a $40 million price tag. The Barca Miami venture, viewed as a sure thing, pulled it’s bid last week, citing a faltering economy. Dan Courtemanche, MLS vice-president of communications and marketing, said an announcement could come as early as March 19.