Although the shrill cry of flocking football pundits proclaim that on March 9, David Beckham will be in Milan — no, LA! — wait for the volley . . . no, Milan! — the only certainty is David Beckham will enjoy himself wherever he goes. So we can all sleep well.

Except perhaps, Bruce Arena, who was building a team around Beckham and Landon Donovan (who scurried off to Bayern Munich for the winter) and now he could be building a team around . . . rookie Sean Franklin? Fine, throw in Edson Buddle and Chris Klein. Winning was never an issue – the Galaxy sold out stadiums all season while clinging to the bottom of the table with league high goals scored (55) and allowed (62).

But Bruce can probably sleep soundly. The last word from Galaxy boss Tim Leiweke was Milan’s $7.7 million (6m euros) offer fell short and Milan had to go to their room and stay there. “They’ve never been in the ballpark,” Leiweke told the LA Times. “They’ll come back, Sure they will. But we owe it our fans [not to consider it].” All the clubs, not just the Galaxy, entice fans to buy season tickets with the Beckham lure, so although the potential cost extends to lofty reaches of pride and credibility (isn’t that why he’s here?) it also chisels away at operational revenue in a shaky (at best) economy.

And Leiweke expects Donovan to come home and clean the garage too. “I went out of my way to loan both of these players and fill their wish, ” said their boss, “I did them both a favor. Now I expect them to return the favor back to the Galaxy.”

Commissioner Don Garber gave AC Milan two days – Friday the 13th – to get serious with the cash saying, “We’ve got tickets to sell, games to schedule, sponsors have programs, we have promotions being planned with ESPN and many of our commercial partners, and this just can’t continue to drag on.” Beckham, who just earned his 108th cap, feels AC Milan is the best place for him to prepare for the World Cup.

Obama to save US Soccer too? 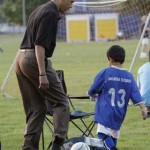 But Soccer Federation president Sunil Gulati submitted bids for the U.S. to host the World Cup in 2018 and 2022, and with 25-35 stadiums capable of hosting matches, the U.S. (22 in world rankings) mostly needs credibility and good will, obviously lost during the Bush administration. Gulati is looking to a higher power than Beckham for that credibility. “Given everything that President Obama has said,” Gulati stated, “everything he stands for, everything he’s talked about in terms of reaching out to the world, trying to bring the global game to the US and opening our borders up for a festival of 32 countries and hundreds of thousands of people from all corners of the world, would be viewed in a very positive way.”

And with the President planning to put the unemployed back to work on green and public works projects, the several MLS soccer specific stadium blueprints don’t look like a far reach. New York, Kansas City, and Philadelphia are building now, and Maryland and Houston have stadiums in the works. Even stingy New England is expected to cough one up.

The Houston stadium, estimated at $1.1 billion, features a retractable roof so games can be played in air conditioning midday — prime time viewing in Europe. The Chicago Fire, Columbus Crew, Toronto FC, Colorado Rapids, Chivas USA, and LA Galaxy already have soccer specific stadiums and Real Salt Lake’s beautiful Rio Tinto Stadium was christened this fall as the shiniest jewel. Rio Tinto is the site of the MNT’s final two World Cup qualifiers after they close out the hexagonal with El Salvador at Rio Tinto September 5 and Costa Rica at not-so-shiny RFK October 14.

The Beckham circus even overshadowed MNT’s Frankie Hejduk slap by a Mexican coach for swearing at/with (depends on your loyalties) the crowd after defeating Mexico 2-0 February 11 at Crew Stadium. Baby Bradley, Coach Bradley’s 21 year-old son, scored both goals just before the half and in overtime extending the unbeaten streak at home against Mexico to 11 matches. El Tri fully challenged the US squad in the first half with superior technical skills and attacking runs by Giovanni Dos Santos, who missed a shot that should have given the Mexicans the advantage. But Mexico collapsed after captain Rafael Marquez was sent off in the 65th minute for coming in late on Tim Howard, who earned a yellow in the altercation and will miss the upcoming qualifier against El Salvador for accumulation. Coach Sven-Goran Erkisson is unlikely to see the Americans again in the August 12 rematch as the loss probably cost him his job. 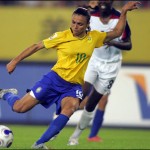 The WPS is winding up for it’s inaugural season by picking off the best talent around the world, including Brazil’s Marta, 2006, 07, and 08 FIFA Women’s World Player of the Year. Marta left her Swedish Club for a $1.5 million deal to join Los Angeles Sol and play alongside WNT Shannon Box, kicking off against Washington Freedom March 29 at Home Depot Center, California.

Although WPS scouting was first rate and Puma lined up big time as a sponsor, the thinking behind these team names will likely be visited another day. But tomorrow, we’ll probably be talking about Beckham again.