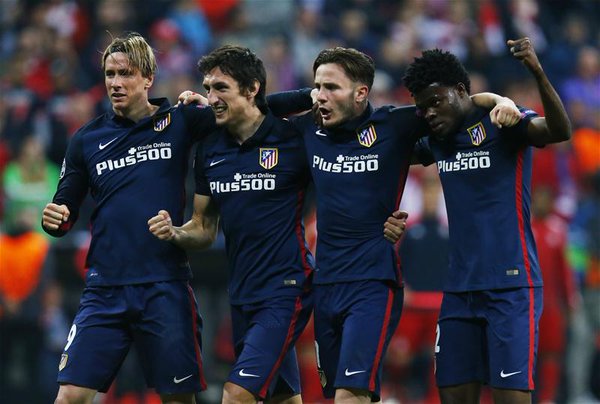 Bayern Munich won 2-1 in the second leg of the Champions League semi-final tie at Allianz Arena on Tuesday night, but couldn’t prevent Atletico Madrid from reaching the finals on away goal rule.

It was a vintage Atletico performance: Diego Simeone’s side sat deep and soaked all the pressure the home side applied and tore Bayern’s defence apart with one moment of sheer individual brilliance.

Bayern took the lead on the half hour mark and levelled the tie, when Xavi Alonso saw his free-kick deflected in. Alonso has become a set-piece specialist for Bayern, as all of his three goals in the Champions League for the Bundesliga club have come from free-kicks.

632 – Atletico Madrid have conceded their first goal in all competitions in 632 mins. Breached.

Three minutes later, Bayern were awarded a penalty when Jose Gimenez pulled Javi Martinez to the floor. Thomas Muller stepped up but he failed to convert the penalty.

In the 54th minute, Atletico got the all important away goal, when Antonio Griezmann silenced the home crowd with a superb one-and-one finish. It his 31st goal of the season.

The drama was not over yet. Bayern got back into the game through Robert Lewandowski, who headed from close range with 15 minutes still left to play.

Atletico got another golden opportunity to put the game beyond doubt when Fernando Torres won a penalty for a foul that appeared to take place outside the area. The Spaniard fluffed his chances from the spot.

Atletico have reached the Champions League final for the second time in three years under Simeone. As for Pep Guardiola, it was his fourth semi-final defeats in a row.

The Spaniard said he was very proud of his achievement at Bayern, but failing to win the Champions League during his time at the German club is seen by many as his tenure a big failure.

What a failure Pep is. If you try to change football, make sure you win everything. Otherwise you are clueless #LittleWorldOfLittlePeople

The Times writer Rory Smith said that it is harsh to label his reign as a failure, but notes he was hired to win the Champions League, which he failed to deliver.

Nor does it make him a failure at Bayern. But he’s only a success with an asterisk, because he was hired to win the CL, and he hasn’t.

This has been a remarkable season for the Spanish clubs, as they have won all 12 knock-out ties against clubs from another nation. Check out the full highlights of the match below