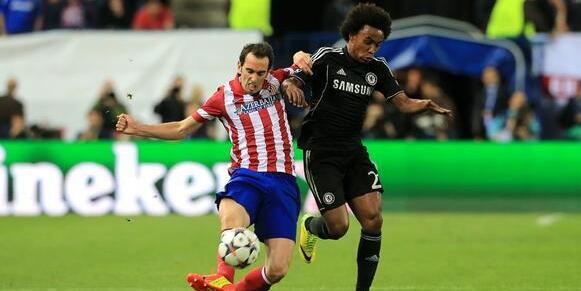 Chelsea and Atletico Madrid played out a 0-0 draw in the first leg of their Champions League semi final at the Vicente Calderon on Tuesday night. 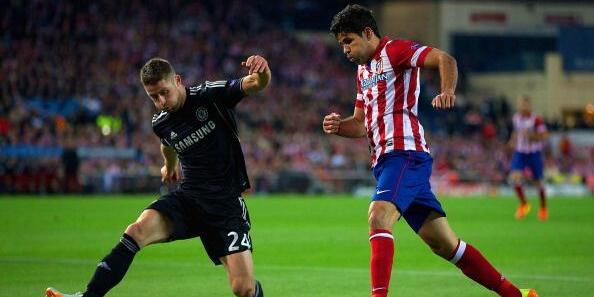 Neither side grabbed the tie by the scruff of the neck as they cancelled each other out. The home side dominated to a greater extent, but it didn’t pay dividends however, but the result would suit Atletico a lot more than Chelsea going to Stamford Bridge next week.

Here are the key tactical observations from the encounter:

Chelsea’s old fashioned setup fathomed by Mourinho looked as if the Blues would start with a cautious 4-3-3 setup which would effectively lead to the 4-5-1.

However rather than overloading the midfield, Chelsea sat back and absorbed the pressure for the entire duration of the encounter. 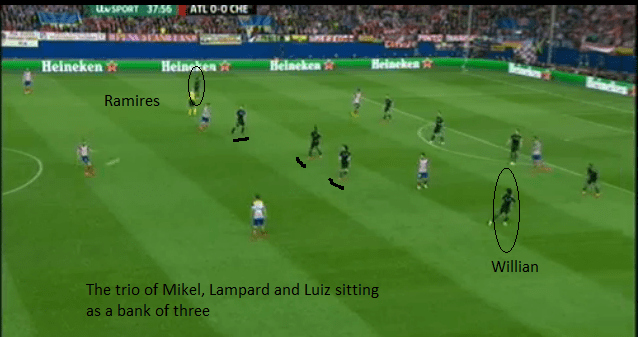 One key feature of the team selection ahead of the game was probably Mourinho’s willingness to pick hardworking midfielders who are more responsible defensively. As the above snap shows, Chelsea were dull and listless going forward, but the Blues deserve credit for working their socks off at the back.

This dented Atletico’s decoy runs which makes them such a potent threat and Simeone’s side rarely mustered a clear cut chance for themselves.

Prior to the match, one of the major talking points was how Chelsea’s fullbacks would try to keep Atletico’s wide play makers at bay. Simeone lets his wide players stay narrow, allowing the fullbacks to run with a mixture of decoy runs and overlapping the opposition wingbacks at will. However, barring two Felipe Luis’ runs from the flanks early in the game, we rarely saw the home side stretch the vistors using the width on either side. 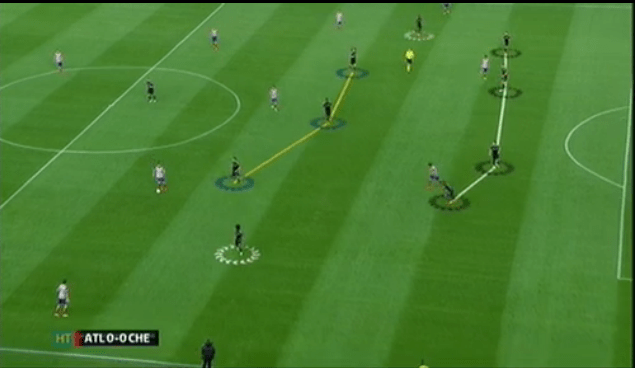 As the above snap shows, Chelsea maintained a narrow backline allowing Ramires and Willian to double team with the fullbacks while David Luiz, Lampard and Mikel effectively sat in  bank of three. Thus what looked like a 4-3-3 at the beginning turned to a false 6-3-1 while Chelsea were out of possession.

Mario Suarez tried to drive his team forward, showing great imagination amidst a largely pedestrian Chelsea midfield. Suarez completed more passes in the final third alone in the first half that the Blues combined. 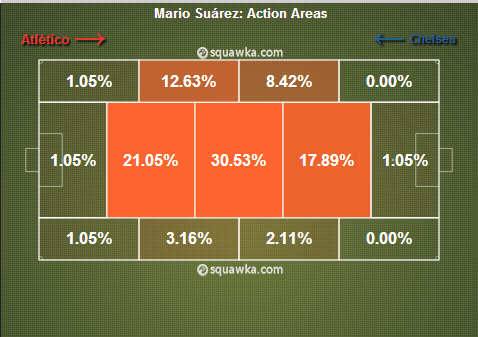 However, the 24 year old was nullified n the second half by John Obi Mikel. The Nigerian played in the pockets of space between Gary Cahill and John Terry, the central back duo, who did a fantastic job at shutting out Diego Costa from the game.

All in all, a disastrous game for the viewers who were expecting a stellar encounter. However, both sets of squads would fancy themselves at London within a week. My bet is still on Atletico scraping though, as I feel Chelsea don’t have enough ammunition to score the goals at Stamford Bridge.

What do you think? Agree with the observations? get involved in the comments below…