Luis Enrique’s side basically have the title in the bag with a four point lead and only two games remaining but should be motivated to get the job done at the Vicente Calderón after Atlético Madrid sealed the title at Camp Nou 12 months ago.

Diego Simeone’s side do need a couple more points to wrap up third place having drawn their last two to allow Valencia back into the frame.

Tiago is suspended for the home side so Mario Suárez should get another game in the centre of midfield. He is the only absentee in Simeone’s side.

Likewise, Barcelona have been fortunate on the injury front of late. They had a fully fit squad to face Bayern Munich in the UEFA Champions League midweek, although Luis Suárez did pick up a hamstring injury at the Allianz Arena that should rule him out of playing on Sunday. 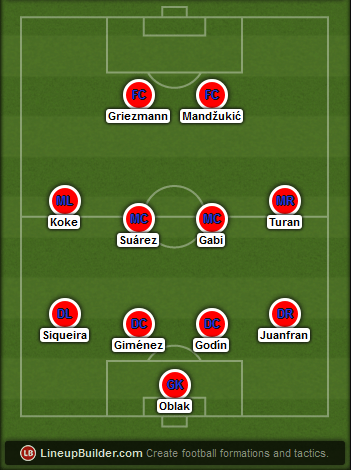 Atlético Madrid play a 4-4-2 formation and the suspension of Tiago won’t be too disruptive as Mario Suárez can slot straight in. Mario Mandžukić faces competition with Fernando Torres up front to start alongside Antoine Griezmann. The Croatian hasn’t played a full 90 minutes in the league since matchday 23 back in February, against Celta Vigo. Both the wingers create most of the chances whilst Griezmann is the top scorer by 10 goals. 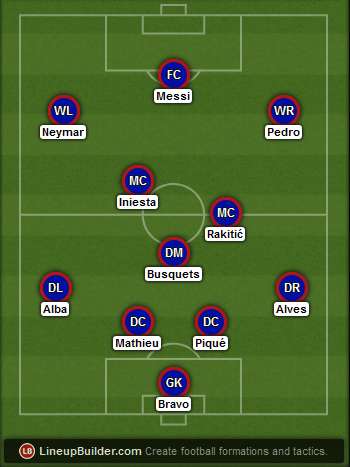 Pedro is the likely replacement for Luis Suárez which would see a slight change in Luis Enrique’s formation, with Lionel Messi moving into the middle of the front three for the Spanish international to play on the right wing. Claudio Bravo will return to goal, having played every minute in La Liga this season, but yet to represent Barcelona in the Champions League.

Lionel Messi vs José Giménez
The Argentine can become the main focus of the Barcelona attack again with Suárez sidelined. Back in January, Lionel Messi put in a man of the match performance as Barcelona thrashed Atlético 3-1 at Camp Nou. Similar again to help Barcelona wrap up the title would allow Enrique to rest players on the final league game of the season with both the Copa del Rey and Champions League finals to come. Young José Giménez will be in for another torrid game against this quality front three.

Neymar vs Juanfran
Neymar also scored a goal in that thrashing of Atlético at the start of the year. The Brazilian forward gave Juanfran nightmares that day, even if he struggled to get many of his attempts on goal on target. He’s certainly found his shooting boots since and we wouldn’t be surprised if he got amongst the goalscorers again this weekend.

Koke vs Dani Alves
If Atlético Madrid are to be competitive in this match then we think Koke is going to have to get on the ball. From out on the left he could find space when Dani Alves bombs forward. The Spanish international is used to seeing a lot of the ball but we cannot expect the same this weekend as Barcelona dominate possession in nearly all of their games. Koke ranks amongst the leaders in terms of assists in the league this season.

7 – The seven shots on goal that Atlético Madrid faced at the Camp Nou back in January is the most they have allowed in any game this season.

20 – Barcelona have won their last five La Liga matches, scoring 20 goals and not conceding a single goal during this run.

Programming note: Atlético Madrid against Barcelona will be shown LIVE on Sunday starting at 12:55pm EST on beIN SPORTS and fuboTV.