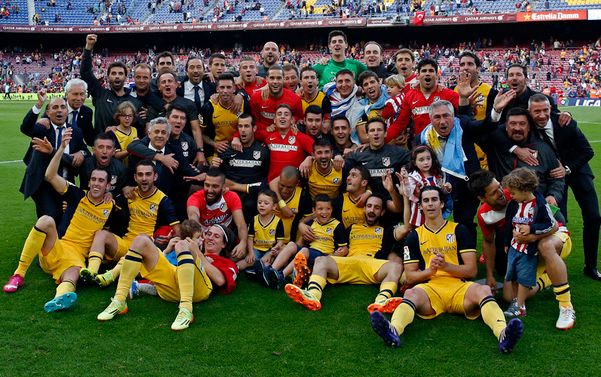 Atletico Madrid were arguably the finest football story of last season. Los Rojiblancos (The Red and Whites) are a club with a huge fan following but possess very little financial resources when compared to Spain’s big two. However, last season under the stewardship of the fierce Diego Simeone, Atletico won their first league title for 18 years and became first non-Barca/Real Madrid winner since Valencia in 2004. The club were a few seconds from winning the Champions League title as well but that was not meant to be. While last season’s achievements will live long in the memory, thoughts will now have turned to what Atletico can hope to achieve this season.

The Ins and Outs:

The club’s success last season inevitably led to vultures circling over their best players and the lure of bigger wages has proved to be impossible for some to turn down. Atletico have already lost Diego Costa, who scored 27 goals in the league last season, to Chelsea in a £32 million deal and full back Felipe Luis has also made the trip to London in a £20 million deal. Thibaut Courtois, a star performer between the sticks, also had his loan expire and the Belgian has now gone back to Chelsea. Adrian Lopez has moved to Porto while David Villa has moved to pastures MLS.

While those are the only confirmed departures so far, rumours persist around centre-back Miranda, with Barcelona and Manchester United interested, and midfielder Arda Turan with Liverpool rumoured to be keen on the player. Atletico to their credit have acted swiftly in the transfer market and bought Croatian striker Mario Mandzukic from Bayern and promising Benfica goalkeeper Jan Oblak and are rumoured to be interested in at least one more striker- Romelu Lukaku and Alvaro Negredo have both been linked.

Though the player turnover is relatively large, fans will be relieved that Diego Simeone has expressed his willingness to stick around and this could prove to be an important factor in any success this season.

Atletico Madrid last season played hard, combative and functional football and to expect that to change would be to expect the sun to start rising from the west. Diego Simeone has a clear idea for his footballing philosophy and that is to win at all costs. The Madrid side were masters of the ‘cynical’ fouls last season and in Diego Costa had a player well versed in the art of diving. While this is in no way a slight at Atletico’s success last season, it is clear that Simeone will expect his team to pull out all stops to rope in victories.

The side will again be expected to have a strong defence and with the likes of Miranda and Diego Godin staying a part of the setup, this will hopefully be achieved without much fuss. The back four is relatively settled with Juanfran and Toby Alderweireld performing full back duties. Emiliano Insua will also be expected to step up to replace Felipe Luis at left back if the club don’t bring in another player for the position. The midfield is again expected to feature Gabi and Tiago as its engine and the likes of Koke and Arda Turan will be expected to be it’s creative outlet. The likes of Tiago and Diego should once again prove to be good options from the bench. Pressure will be on Mandzukic to replicate Costa’s goalscoring prowess and the club will be hoping another striker can be bought to share the goalscoring responsiblities.

Atletico Madrid’s success last season means that fans will be expecting them to compete at the top of the table once again. This could however prove to be extremely difficult this season as local rivals Real Madrid have made major moves in the transfer market by signing Colombian World Cup sensation James Rodriguez, a World Cup winner in Toni Kroos and have agreed a fee for another tournament sensation in Costa Rican goalkeeper Keylor Navas. The moves mean Real Madrid now boast a front line of Cristiano Ronaldo, Gareth Bale, James Rodriguez and Karim Benzema which, on paper at least, looks to be the best frontline in all of Europe.

Atletico’s other potential rivals for the league, Barcelona, have also made a major statement of intent in the transfer market. In comes the flawed brilliance of Luis Suarez and finally a centre-back in the shape of 30-year-old Jeremy Mathieu. Suarez is expected to have his four month ban reduced by the Court of Arbitration for Sport which means Barca could potentially start the season with a front three of Neymar-Messi-Suarez, another tantalizing concept for neutrals and fans alike. Barcelona have also made a managerial change in Luis Enrique who replaces the beleaguered Gerard ‘Tata’ Martino and fans will be expecting a much improved Barcelona side this season.

Diego Simeone will claim that his side’s successes are built on team spirit and unity and last season’s achievements are proof of that. However, Atletico will do well if they remain in contention for the title come March and this particular columnist predicts that they might be well adrift at that point. Los Rojiblancos should have enough about them to be the best of the rest in Spain and should be expected to comfortably hold on to third spot and automatic qualification for the Champions League.

The performances put in by Simeone’s men during Atletico’s run to the final of the Champions League caught the imagination of neutrals and fans alike. Atletico fans should look forward to another strong showing in Europe this season but one imagines the loss of key players will hamper their European adventures. Mario Mandzukic, while a quality player, does not possess the same attributes that made Diego Costa such a potent weapon for the Madrid side. The loss of the experienced David Villa will also hurt and this column predicts that a quarter-final finish will be an impressive return for Simeone’s men.

El Atleti were the biggest story in all of Europe’s top leagues last season but it is clear that the side will find it hard to match their recent achievements. A strong showing in Europe and La liga will surely appease the fans whereas the club’s main chance of silverware will be the Copa del Rey this season. One thing is for certain though, if Atletico can pull off another La liga heist, then it might just be their greatest achievement ever.