Atletico Madrid have a great tradition of signing top strikers around the world. The likes of Fernando Torres, Radamel Falcao, Sergio Aguero, Diego Costa, Diego Forlan et al have all graced Calderon over the years.

Diego Simeone wants to add quality strikers to the squad this summer as well. The Rojiblancos have been heavily linked with a move for Juventus’ striker Carlos Tevez, but it seems they are already close to signing a top striker already. 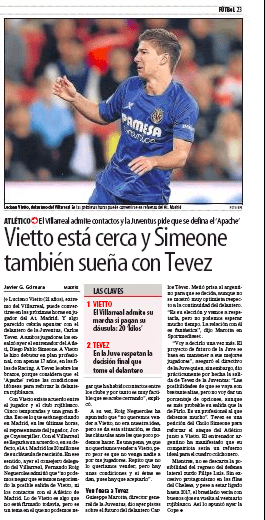 Mundo Deportivo reports today that Atletico Madrid are close to completing a deal for Villarreal striker Luciano Vietto. The Yellow Submarines are helpless in keeping hold of their star player, as Atletico are looking to pay his release clause, though to be around €20m. Atletico have already agreed a deal with the player, and should not face any problems in sorting out an agreement with Villarreal as well.

Plus, they are ready to pay an extra €5m in add-ons. If the deal goes through, his former club, Racing, will get 20% of the fee as well.

The newspaper the deal would be completed “las proximas horas”, a common phrase it Spain which means ‘soon’.

Vietto has been heavily linked with a move to Liverpool, the hype mainly generated by the English press. To be honest, we haven’t seen enough interest from Liverpool in the last few months. The Reds however have confirmed a deal for Danny Ings, who becomes the second major signings, after the club confirmed the signing of James Milner, who will join Liverpool on a free transfer from Manchester City.