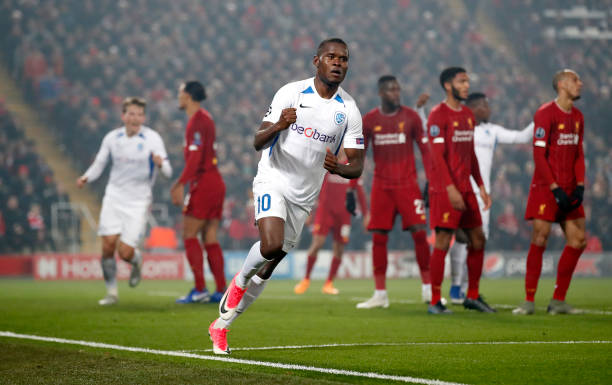 Aston Villa fans have taken to social networking site Twitter to express their reaction to reports linking their club with a move for Genk striker Mbwana Samatta in the January transfer window.

Villa are in desperate need to sign a striker this month following the injury to Wesley who has been ruled out for the rest of the season.

According to reports from The Guardian, the 27-year-old is expected to be ‘granted a work permit for his move’ to Aston Villa. The Premier League outfit is yet to agree a deal with Genk, but it should be done soon.

The negotiations between the two clubs are currently ongoing. Villa have agreed to pay £8.5m to buy the 27-year-old who would become the first Tanzanian player to move to the Premier League should the deal go through.

Samatta has been in good form this season, and has scored against Liverpool in the Champions League. Here are some of the selected tweets from the Villa fans:

We can only believe and hope that he can save our season, I know the fans will be behind whoever we sign, he looks a smart signing for the price. UTV 👍👍

And the Scout writers are 💯 right. Mbwana Samatta is an exact choice, very ambitious and hungry to score. He’d be Top score if he started the Season.

I’m just thankful we’re getting a striker – other than some of the ones mentioned this week . He looks quite pacey and knows where the goal is. I hope he can adapt quick to the pace of the prem.

Looks more promising than Slimani or that Piatek.

Villa are looking to sign at least two strikers this month, and therefore, Samatta probably won’t be the only striker coming in. They are showing keen interest in Islam Slimani (h/t Sky Sports), who is on loan at Monaco from Leicester City.