What a transfer window this is turning out to be for Arsenal. After having already signed four players this summers, the Gunners have now stepped up their pursuit of €17m rated Brazilian winger Douglas Costa. 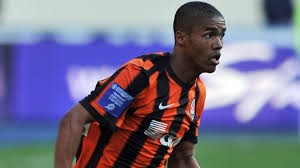 The trusted  and reliable Gianluca Di Marzio website have also reported that the London club would be willing to let World Cup star Joel Campbell leave on loan to AC Milan if they manage to sign the Shaktar Donetsk player.

The 23 year old Costa has caught the eye of several top flight clubs across Europe after joining Shaktar from Gremio in 2010. The winger would seamless fit into Arsenal’s starting eleven thanks to his knack of scoring goals despite playing out wide.

The player has refused to return to his club thanks to the political unrest in Ukraine which French Football journalist confirmed from his Twitter account.

Dutch newspaper Voetbal Primeur also cited the player saying, “Everything we read, see or hear about the country is not good., We totally do not know in what situation we need to train or have to go play.”

The Gunners though will have a tough fight on their hands to acquire the signature of the player with nouveau riche French side Monaco also interested.

Coming to the Campbell story, AC Milan are interested to get the Costa Rican on loan after the 22 year old was tipped to make an impression for Arsenal following his brilliant World Cup exploits. The recent developments comes days after the San Siro outfit made it public that they would sell Mario Balotelli to the English giants for €10m and Campbell.