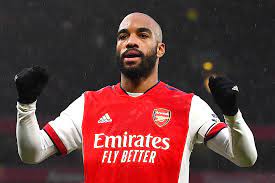 The French international could be in line for a return to Ligue 1 with Lyon interested in welcoming him back.

Ligue 1 football beckons Alexandre Lacazette who is set to enter free agency this June. The French striker has been at Arsenal for quite a while. However, with his contract with the Gunners set to end and no contract offer in sight, the France international is set to look for a new team.

At the age of 30 and five years at the Emirates, the striker is in a position where he has to find a new team despite some encouraging performances of late. The 30-year-old has scored five goals and provided 6 assists in 25 games this season.

He still remains a player of great talent and is attracting interest from clubs in Ligue 1, Serie A and even MLS.

However, the former Olympique Lyon man does not intent to leave the continent just yet and is reportedly eager to return to France where he enjoyed a lot of success with Ligue 1 giants Olympique Lyon.

According to information revealed by Nicolo Schira, journalist for the Gazzetta dello Sport, Alexandre Lacazette has been offered to Juventus Turin as well as Inter Milan. A proposal analyzed but far from being the priority of the two Italian teams when the Old Lady has just released the checkbook for Dusan Vlahovic and the Nerazzurri can still count on a red hot Lautaro Martinez.

This is excellent news for Olympique Lyonnais who dream of being able to welcome back a player who shone for them. Les Gones stands out as one of the most credible leads to date.

Moreover, Lacazette is also reportedly eager to return to France where he might be able to get enough game time and raise his performances in order to play for Les Bleus at the World Cup in Qatar later this year.