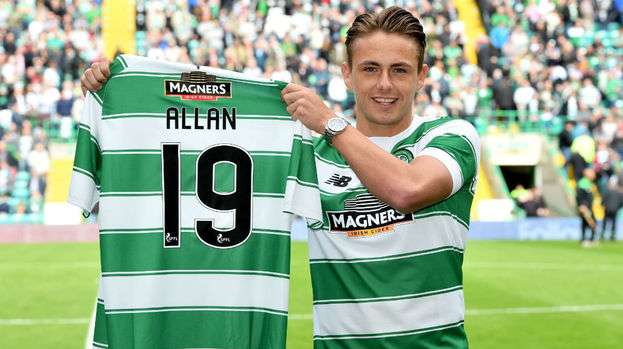 The 26-year-old doesn’t feature in Brendan Rodgers’s first team plans and he is yet to make a single appearance for the Bhoys this season.

Stubbs signed Allan in the summer of 2014 from West Bromwich Albion on a free transfer when he was the manager at Hibernian.

Allan joined Celtic a year later. He has just 17 appearances for the Hoops and has been frozen out by Brendan Rodgers.

He spent loan spells at Rotherham United, Dundee and Hibernian already in the last three seasons.

Stubbs has urged Allan to leave the club, stating he is too good a player to be wasting his talent on the bench.

The former Everton defender has added that Allan needs to play regularly, and that he is surprised that the playmaker hasn’t left the club already.

“He needs to be playing, wherever that is, whether it’s at Celtic or out somewhere else,” Stubbs said. “It’s not doing him any favours being there, especially with the way that the loan window is now. It is every six months and you’ve got to be out.

“It’s not doing Brendan any favours. He’s too good. I’m surprised he hasn’t gone out.”

Allan is facing an uncertain future at the club. He has only a year left on his contract, and moving away from the club is the best solution for him.