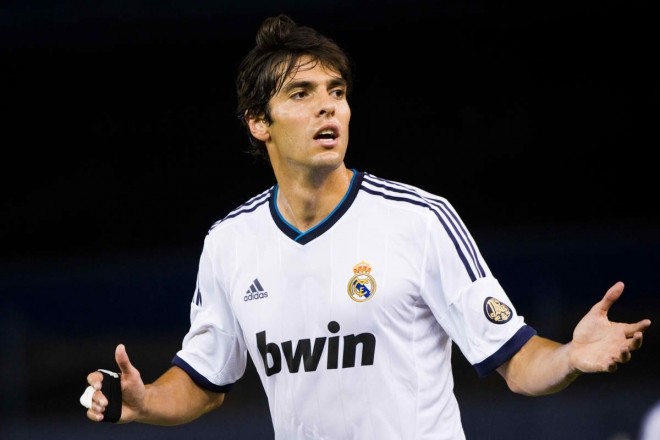 Serie A side AC Milan are nearing a deal to re-sign Real Madrid’s attacking-midfielder Kaka, after four years to forget at the Santiago Bernabeu.

The 31-year old left Milan to join Madrid for a world-record £60M in 2009. The record has since twice been surpassed by Cristiano Ronaldo (£80M), and Gareth Bale (£86M) – who both joined Real Madrid.

Kaka has struggled for form since his arrival, and this summer he publicly revealed he wanted to leave the La Liga giants.

‘I want to go. I think now is the right time for me and for the club to leave amicably. I’ve spoken with (Real Madrid manager) Carlo Ancelotti and with the club, they all know. My father is talking now with the club to try and resolve this situation.’

He added how his move to Spain didn’t go exactly as he had liked, and he was frustrated with having to be named on the substitute’s bench for extended periods.

During his time at AC Milan, he made 262 appearances – scoring 95 goals. At Real Madrid, he scored 29 goals in 120 games – with a third of his appearances having come from the bench.

He found himself expendable with the Champions League semi-finalists, and he is now seeking a move where he will be considered an important player again.

His former side AC Milan have fought tooth and nail to bring him back, but are yet to agree personal terms with Kaka.

A two-year deal is said to have been agreed, and many are awaiting the news of his return. The fee to procure his signature has not yet been disclosed – nor have the personal terms Milan are said to have offered him.

‘There is an agreement with Real for Kaka. However, he hasn’t signed with Milan, therefore he is not yet a Milan player.’ – AC Milan vice-president Adriano Galliani.