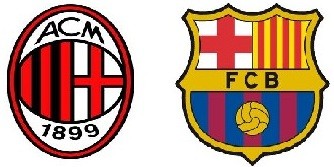 AC Milan face the biggest challenge out of all the clubs in the last 16 of the Champions League. They must try and gain a first leg advantage over Barcelona because of the difficulty of forcing a result at the Nou Camp for any side.

AC Milan have proven to be an all or nothing sort of side at home this season. They have won nine matches but have lost four, despite the fact they have only conceded 12 goals. They are 11 points off the pace in Serie A which is currently being headed by Juventus.

Defenders Didac Vila and Bartosz Salamon are unlikely to play in this match. Nigel de Jong is also out of action with a ruptured Achilles while Stephan El Shaarawy has knee problems which will keep him out. Mario Balotelli will not play due to being cup-tied after playing in the group stages with Manchester City.

Milan are available to win at 9/2 with the bookies.

Barca have reacted superbly to losing the La Liga title to Real Madrid last season. They have barely slipped up away from home with a record of 11 wins, one draw and one defeat. They have scored 40 goals away from home which is just under double the next highest scoring side.

Barcelona are missing long term absentee Eric Abidal who is fighting a liver problem while David Villa will not play after recently coming out of hospital after two operations relating to kidney stones. Otherwise Barca have a fully fit and ready squad to choose from.

Barca are the odds on favourites to win at 8/15.

Milan were extremely inconsistent through the group stage which is why they finished behind Malaga and have this tie. They won two, drew two and lost two in the group games and finished with a goal difference of plus one having scored seven and conceded six.

Qualification was a breeze for Barcelona as they won their group with a three point advantage over Celtic. The Spanish side won four matches, drew one and lost one which was that defeat away at Celtic Park.

Barcelona edge the head to head record between the sides in Milan with two wins to one. This tie ended in a 0-0 draw the last time these teams met in Italy.

AC Milan are in superb form with four wins from their last five games and an unbeaten record during that time. They haven’t conceded more than one goal in a game in their last five matches.

Barcelona actually have the worse record from the last five games having drawn one more match. However, the Spanish side have scored five or more goals on two occasions during this spell.

AC Milan have to push to try and win the match but their number of losses at home in Serie A is worrying. Barcelona will be confident of taking some sort of advantage back to the Nou Camp so expect just that.