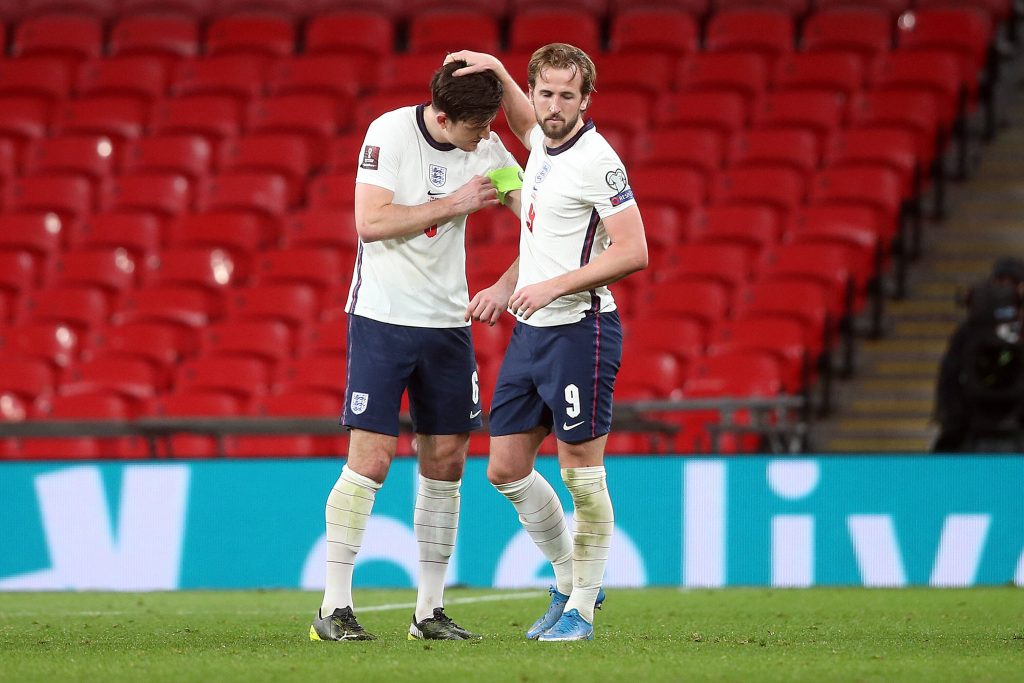 England rounded off the international break with their third win from three, defeating a Robert Lewandowski-less Poland 2-1 thanks to goals by Harry Kane and Harry Maguire.

So…all is good, right? Well…not really. It’s evident that Gareth Southgate’s men still have a lot to work on before this summer’s European Championships.

It was a really positive first-half showing from England. The defence came under no threat, Declan Rice and Kalvin Phillips looked dominant in the middle, and the front four of Mason Mount, Phil Foden, Raheem Sterling, and Harry Kane were combining excellently to create chances. The opening period ended 1-0, and it probably should have been more.

By contrast, the second half was a massive step backwards. Poland got an equaliser following some generous defending, and everything changed from there. England looked slow, static and unable to create anything. Sure, they got the winner, but it was far from convincing.

It’s not the first time that we’ve seen this from England. The same happened against Tunisia, Colombia and Croatia at the World Cup, as well as the Netherlands in the 2019 UEFA Nations League semi-final. In all of those games, the Three Lions had spells of dominance but then lost control after conceding a goal.

Is it complacency? Is it a lack of leadership? Who knows, but it’s happened far too often for it to be a coincidence. There is clearly a mentality problem with the English national team right now, which needs to be fixed before the Euros.

Southgate’s alarming lack of a Plan B

Gareth Southgate tends to divide opinion among the fans. Some believe that he has done a good job with the national team, while many others have lost faith in the former Middlesbrough boss. On Wednesday, the sceptics were out in full force.

The hosts were expected to win the game. In fact, any less than three points would have been met with anger and questions from the media and public. So, when England were slogging through the second half, struggling to create anything of note, the pressure was on Southgate to find a winner.

How did he set about trying to score a second goal? By doing…nothing. No changes to the system, no substitutions – nothing. The 50-year-old persisted with Plan A, despite the obvious need to mix it up. Sure, they got the winner, but this won’t always be the case.

Maybe things would have been different had Jadon Sancho, Marcus Rashford and Jack Grealish been available. However, that isn’t an excuse – you have to work with what you’ve got. Southgate will need a better Plan B if he wants to lead England to glory.

The defensive mistakes are still there

Under Southgate, England like to play out from the back. It’s a tactic adopted by pretty much every elite side in Europe, so it makes sense. However, it can lead to catastrophic errors.

This time around, it was John Stones who was responsible, carelessly losing the ball just outside his own penalty box to allow Jakub Moder to equalise. This isn’t the first, second or even third time that the Manchester City man has made a mistake in an England shirt that led to a goal.

And he’s not the only one in the backline who has a clanger in him. Kyle Walker has been known to make costly errors in the past. Regular number one Jordan Pickford is also notoriously prone to mistakes – although he is yet to make one for England.

No matter how good you are, there is no manager in the world who can cut out individual errors. They will happen now and then. But it’s far too frequent with England.

It cost Southgate’s side in the 2018 World Cup and then again in the 2019 UEFA Nations League. Let’s hope lightning doesn’t strike for a third time this summer.

Declan Rice – the first name on the team sheet?

Southgate has been widely criticised for his use of two defensive midfielders, and Declan Rice often gets caught in the crossfire. Nonetheless, the West Ham United man is perfectly responding to the critics – by putting in top-class performances.

Against Poland, Rice earned his second Man of the Match award in a row. His composure, drive, and energy in the middle of the park was key to England’s first-half dominance.

Obviously, the likes of Kane and Sterling are bigger names. However, Rice has the potential to be the most important player in the squad.

Set-pieces could be crucial again

We all saw it during the World Cup. The infamous ‘love train’ (thanks Glenn Hoddle) corner routine, a few Kane penalties, and a worldie of a free kick by Kieran Trippier. England are good at set-pieces.

Once again, the dead-ball situations came to the rescue. Kane opened the scoring from the penalty spot, and Maguire slammed home from a corner following Stones’ knock down.

This is not a mark against England at all. Being good at set-pieces is important. A team will get multiple corners and free-kicks every single game, so it’s handy to score regularly from them. It’s clearly something that Southgate and his side have worked on in training, and it produces good results on the pitch.

Furthermore, this will give them a chance to dig themselves out of a hole when things aren’t going their way. It doesn’t matter how good you are or how well you’re playing – it’s tough to stop a side who are dangerous from a dead ball.

The concern will be the possible over-reliance on set pieces. Only three of England’s 12 World Cup goals came from open play. Additionally, over the two UEFA Nations League campaigns, only eight goals in open play were scored in 12 games. This isn’t enough.

Unless the Three Lions can ramp up their output from open play, it could be another summer of relying on set pieces for goals.

Read also: England struggle past Poland to make it three from three in World Cup qualification.