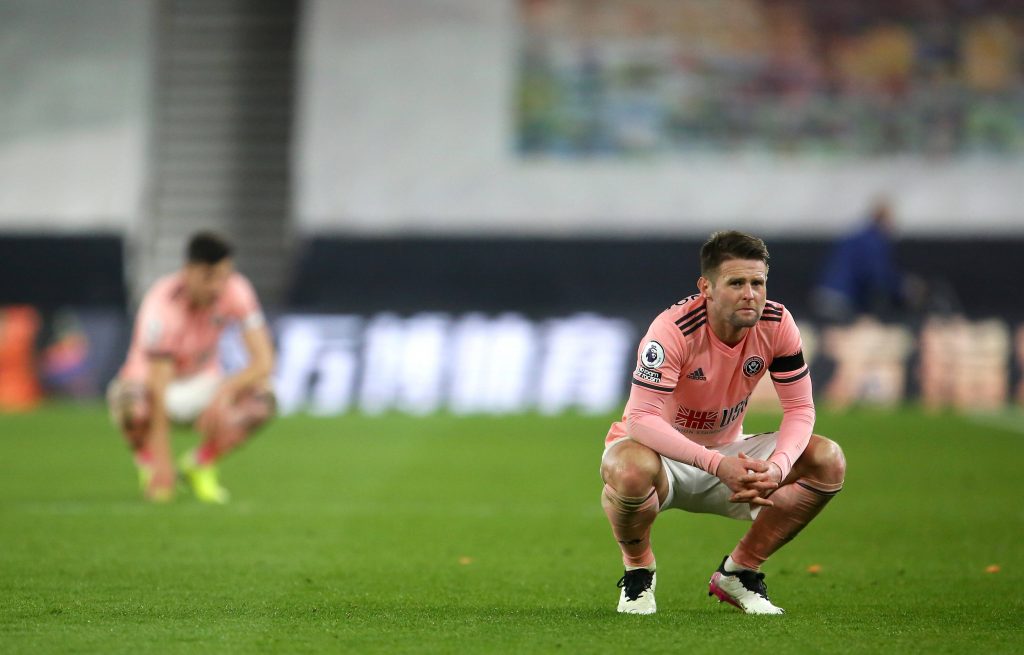 Following a 1-0 defeat against Wolverhampton Wanderers, Sheffield United’s relegation from the Premier League was confirmed with six games remaining.

It’s been a miserable campaign for the Blades, racking up just 14 points from 32 outings, scoring only 17 goals. To say they’ve been a shadow of the team they were last season is being generous.

The departure of Chris Wilder, coupled with the loss of Premier League TV revenue, could have a lasting impact at Bramall Lane.

Having lost their opening two games against Wolverhampton Wanderers and Aston Villa without scoring a goal, a fixture against a newly-promoted Leeds United side who had conceded seven in their opening two was probably what they needed.

However, the hosts still failed to find the net, with away goalkeeper Illan Meslier in inspired form.

Then, in the 88th minute, Jack Harrison’s deep cross was nodded home by Patrick Bamford, giving the visitors all three points.

Three games, zero points, zero goals – it was evident by now that Sheffield United were in for a long season.

Nine games into the season, and Wilder’s men had still not won a game, picking up just one point. Thankfully, they face a West Brom side who are also winless from their first nine.

Chelsea loanee Conor Gallagher put the Baggies ahead early on with a low drive from outside the box, and they managed to hold on from there.

Once again, it was the finishing that cost the Blades. George Baldock fired one over from close range, and Oli McBurnie had a glorious chance but fired it too close to Sam Johnstone.

Right at the death, the Yorkshire side had a golden opportunity to snatch a point, but both Rhian Brewster and Lys Mousset failed to convert from inside the six-yard box.

The following weekend, United had the opportunity to bounce back from their disappointment at the Hawthorns with a home game against high-flying Leicester.

Ayoze Perez broke the deadlock with a scrappy goal, but McBurnie netted an equaliser almost instantly. The Foxes twice hit the post, but it seemed like the game was heading towards a draw.

That was until the 90th minute, when the usually reliable John Fleck carelessly lost the ball in midfield, allowing James Maddison to slide a ball through to Jamie Vardy.

The boyhood Sheffield Wednesday fan raced through on goal and finished into the far corner to snatch the victory.

Gameweek 17 now, and the Blades are still without a victory. If they fail to win at Selhurst Park, it will be the longest any Premier League side has gone without a win from the start of the season.

They could hardly have made a worse start. Jeff Schlupp gave Crystal Palace an early lead, finding the far corner via a small deflection.

Shortly before half time, the Eagles made it two in dazzling fashion. Ebere Eze collected the ball in his own half, drove forward about 60 yards, skipped past two players, and rolled the ball into the far corner from the edge of the box.

The game finished 2-0, securing United’s place in the history books for the wrong reasons.

Thankfully, they did get that elusive win one week later, beating Newcastle United 1-0 at home.

Well…no. Heckingbottom’s first game as interim boss came at the King Power Stadium, and his side were comprehensively beaten by a confident Leicester side.

Brendan Rodgers’ men put on a ruthless second-half display, bagging a further four. Perez made it two in the 64th minute before Iheanacho added two more to his tally to seal his hat-trick. A late Ethan Ampadu own goal ensured that the game ended 5-0.

Sheffield United ended the game with 28% possession and only one shot, with none on target.