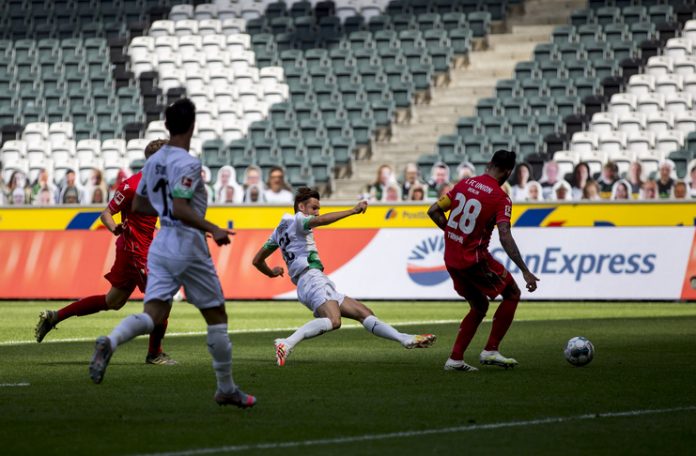 Gladbach welcomed Union, knowing that a win would take them back into the top 4 of the Bundesliga table.

The Foals dominated early on, and they got their reward 15 minutes in when Neuhaus was able to score after rounding Friedrich.

5 minutes before half time, they doubled their lead when Thuram was afforded a free header, after Pléa set him up.

Union came out strong in the second half, and got a goal through Andersson, who was able to head home after a set-piece.

But soon, Thuram added to his tally, as Pléa set him up again with a ball across the face of goal, and he was left with a tap-in.

Finally, with 10 minutes left, Bensebaini set Pléa up with a brilliant cross, and the Frenchman guided it home. And so it ended, 4-1 to the Foals.

The home side looked to play through midfield, and switch play with quick passes. Union failed to prevent them from doing that, and got punished for it.

Union started with a back three, but switched to a back 4 at half time. Their main problem was the fact that the Gladbach forwards were able to create massive holes between their centre-backs, and they paid for that.

Yann Sommer – Made numerous saves, but all of them were fairly easy. 6.75.

Stefan Lainer – Patrolled the right flank throughout the match. 6.5.

Nico Elvedi – Strong at the back, as he made numerous important interventions. 7.25.

Ramy Bensebaini – Provided Thuram with a limitless supply of through balls, and even got an assist for his side’s fourth goal. 7.

Jonas Hofmann – Did well to help his side in transition through midfield. 6.75.

Florian Neuhaus – Got a great goal thanks to his tenacity, and worked very hard for the rest of the match. 7.25.

Lars Stindl – Industrious performance from the captain, as he made challenges everywhere and helped orchestrate his side’s attacks. 7.

Patrick Herrmann – Not a great match for him, as he was subdued down the left, and failed to score when he had an open goal (albeit with a tight angle). 5.75.

Alassane Pléa – Brilliant performance from the Frenchman, as he worked very well with Thuram. Ended up with a respectable tally of 2 assists and a goal. 7.75.

Marcus Thuram – Yet again he was extremely dangerous up front – simply unstoppable on the ball, and he popped up on either flank to make matters worse for Union. Got 2 deserved goals. 8.

Team – Gladbach were the better side from the get-go, and even though 4 goals maybe a slightly flattering tally, they certainly deserved a victory. They looked very strong, and showed a strong mentality to bounce back emphatically after two disappointing performances this week. 7.5.

Rafał Gikiewicz – Made a collection of saves in the first half, but his distribution was poor. 6.25.

Marvin Friedrich – Not a great match from him – he should have prevented the first and last goals, and he couldn’t do much apart from that either. 4.25.

Keven Schlotterbeck – He was the one who held the Union defence together, as he made numerous crucial recoveries. 7.

Neven Subotić – Battled hard and recovered well, but his passing was loose, which almost cost his side. 5.5.

Christopher Trimmel – Not great on the right flank, as he failed to stop Thuram or influence the game in any way. 4.5.

Christian Gentner – He was decent in midfield, especially in attack, as he delivered a couple of threatening crosses in the second half. 6.25.

Grischa Prömel – Not a great performance from him. He was overrun in midfield, and his poor decision-making led to the third goal for the hosts, which is probably where the game was decided. 4.75.

Christopher Lenz – Decent down the left as far as containing Herrmann is concerned, but he misplaced a few passes – for example just before the opener. 5.5.

Marcus Ingvartsen – Did alright to support Andersson, and even assisted him with his knee. But he failed to cause an impact in the match bar the assist. 5.5.

Sebastian Andersson – Worked tirelessly in his efforts to press the Gladbach defence, and got his side’s only goal through a relatively easy header. 6.5.

Marius Bülter – Not really involved in the match. 4.5.

Joshua Mees – Was very lively from the minute he came on, and threatened Sommer a couple of times. Caused a spark in Union’s attacks, but eventually died down. 6.75.

Team: Union were second-best for most of the game, and though there seemed to be an upsurge in the second half after they managed to halve the deficit, it was put to bed by Prömel’s mistake followed by an unfortunate injury to Ryerson. They may get dragged into a relegation battle if they don’t start picking up points. 6.

Gladbach move up to third place for know, and the Foals’ Champions League hopes will certainly have been boosted by this result, after only picking a point in their last two matches. Their performance was very strong too, and will give them lots of confidence for the future.

The same cannot be said for Union however, who looked lacklustre and clueless. They sit in 14th place, 3 points above Mainz. If they fail to pick up points quickly, they may get sucked into the relegation fight.