Manchester United fans were excited when Angel Di Maria signed £59.7m from Real Madrid in the summer. The Argentine, a proven world class winger effortlessly fitted into Louis Van Gaal’s system and it seemed he got down to business to justify his price tag. The 26 year old already has 3 goals and grabbed 5 assists from 9 games and also assisted Juan Mata’s winner against Crystal Palace in the weekend but he has looked way past his best in recent outings. 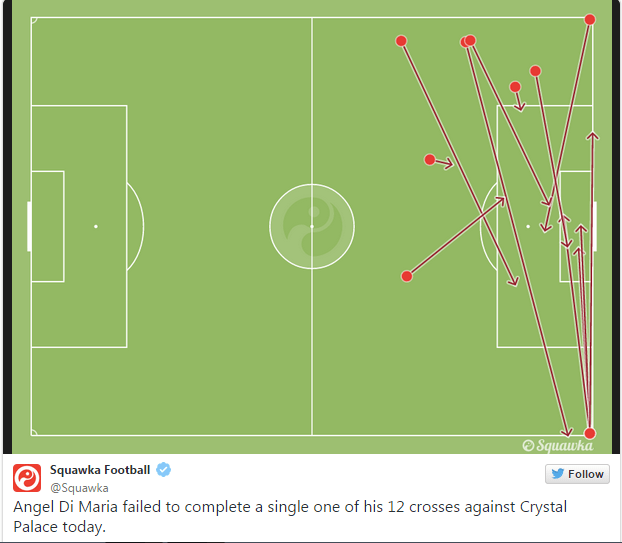 He was United’s worst passer on the night with a 81.8% successful rate and as the above snap shows, none of his 12 attempted crosses found a team mate. The performance left Van Gaal fuming who later slammed the player, “Sometimes you cannot dribble, so you have to make it a passing game, and Di Maria is not a player who wants to give a pass every time he gets the ball. But in this case we needed that and not dribbles. Therefore he lost the ball a lot and that was not good for the balance of the team.” Real manager Carlo Ancelotti too added to the criticism saying Di Maria “used to lose control” and botch “important passes” during his time at the Bernabeu.

However is this criticism justified? Or is Van Gaal himself under utilizing the Argentine playing him on the wings? Di Maria failed to get past national team mate Pablo Zabaleta in the Manchester derby and his crossing was way below his best. Against Chelsea, he was tactically used as an inverted winger to beat the Blues’ weak link Filipe Luis at left back, but once again failed to live up to his expectations. A move to the left at half time didn’t help as Branislav Ivanovic had a superb game till his sending off.

The Argentine was the driving force behind United’s wins against QPR and Everton where he played on a more central role. However, the plethora of injuries has limited Van Gaal luxury to give Di Maria a free run. As the last season at Real Madrid showed, Di Maria’s greatest strength was to drop deep to gain possession and then acting as the playmaker. He was more comfortable as a carrier and provided brilliant layoffs to Ronaldo or Benzema as shown in the two snaps below. 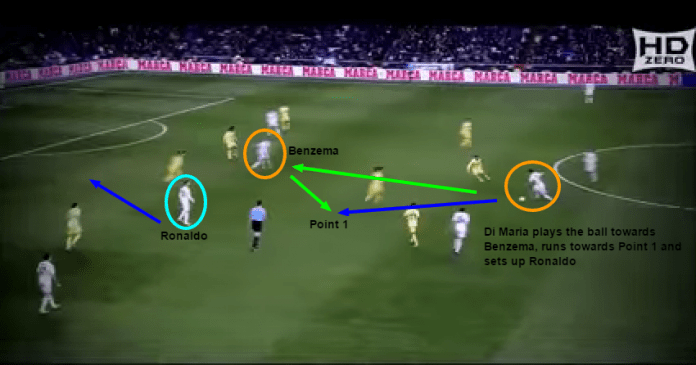 Di Maria arguably had his best game Leicester City, the encounter which United dramatically lost 5-3. The Argentine constantly made runs in the middle as Wayne Rooney pulled out wide to drag defenders out with him. This is the ideal situation where he thrives. Just as the above snap shows, he drops deep, plays a quick one-two with Benzema before laying off for Ronaldo with a perfectly weighted ball. 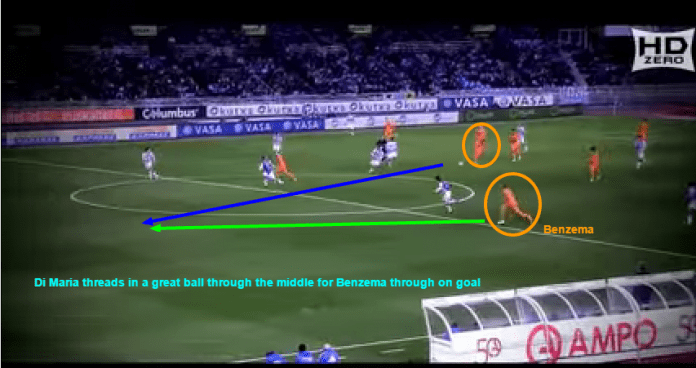 Against Everton too, Di Maria’s goal came when he cut inside as Juan Mata laid it on his plate for an emphatic right foot finish. Moreover, the World Cup runner up’s assist for Falcao came similarly. He cut inside from the wings and laid it to the Colombian for the match winner. However, Di Maria’s best game of the season came in Argentine colours when he single-handedly beat the Germans in what a rematch of the World Cup final. He scored 3 and set-up another as the Albiceleste ran riot in Dusseldorf. To be fair though, only four members of the Germany starting XI played at the Maracana.

Its pretty evident that Di Maria must be deployed in the inside left role. Van Gaal has shown great courage;  that he is not afraid of changing formations to suit his players. United’s next encounter against Arsenal might throw up a tactical tweak from the Dutchman, playing a more conventional 4-2-3-1 with Di Maria starting up wide but continuously darting inside to terrorize Per Mertesacker and Calum Chambers. With Rooney drafting wide or dropping deep, it will also help Di Maria showing his true caliber for the rest of the season. Till then though, we will have to be contended with the International break.