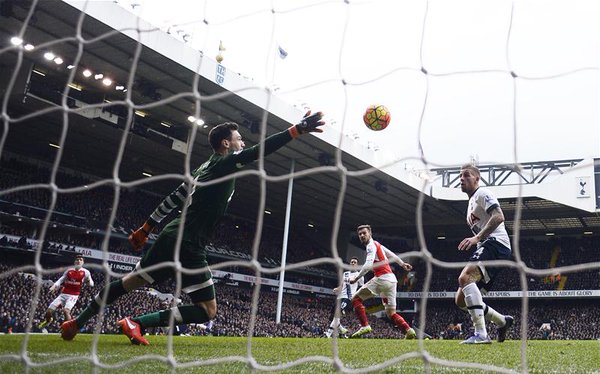 Tottenham and Arsenal drew the game 2-2 in the North London Derby to make the title race more exciting.

Arsenal and Tottenham engaged in an exciting North London Derby with the title at stake for both sides for the first time. The Gunners took the lead with Aaron Ramsey’s first half strike. It was a sweet finish by the Welshman who might have thought that he gave the visitors all three points to take away from the White Hart Lane. However, Francis Coquelin’s needless challenge in the second half gave Spurs the advantage and within 5 minutes, Alderweireld scored to give a chance at comeback. It was dreamland for Pochettino’s side when Kane scored a screamer just 2 minutes after to give his side a 2-1 lead. Alexis Sanchez ended a personal drought as his 75th minute strike ensured the Gunners didn’t go back empty handed.

Here are the Twitter reaction from an intense game of football that ended with both sides getting a point apiece.

Still plenty of time for both teams to disappoint their fan bases in excruciating fashion again. #NorthLondonDerby

This game is bewildering. First Arsenal Spursed it up, and now Spurs have Arsenaled it up. #NorthLondonDerby

Watch the highlights of the game: