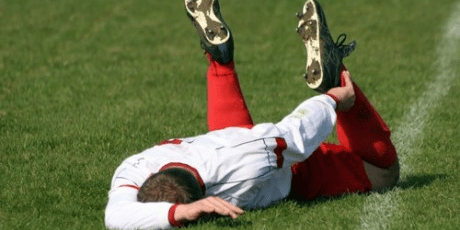 It is never a good sight to see a player receive a serious injury. The same can not be said about all the injuries though.

Being a contact sport, football is laced with dramatic injury stories over the years – so much so that some of the players were just watching TV when they got injured.

Here are ten of the best, some funny and some very serious:

Killed by a splinter

A player sadly passed away after a splinter pierced his intestine during a game of indoor football in Brazil, 2010. The player was attempting a tackle when the wooden floor broke leaving a splinter sticking out which stabbed the player and caused the fatal injury.

Marseille coach Michael Sizani was shot dead by a referee during a match against the Mighty Elevens in the Eastern Cape district of South Africa. Sizani was leading his players over to the referee to complain about the decision and the same bullet injured the opposition coach and an opposition player.

Chester FC were playing Aldershot Town FC in the fourth division in 1966. Both Chester full backs broke the same leg. They were both called Jones and they both ended up in the same hospital ward. They were both carried off on a stretcher causing severe stoppages and a huge amount of added time.

Egg on his face

Rangers defender Kirk Broadfoot was treated for facial burns in 2009 after an incident involving a poached egg. Broadfoot was poaching the egg in his microwave before an explosion cause the egg to come flying out of the microwave in different directions quite literally leaving the defender with egg on his face.

Limber up for morning stretch

Reading striker Leroy Lita was forced to endure a spell in the treatment room in 2007 after he pulled a muscle after waking up in bed. Lita was in the process of completing his morning stretch which cause him to snap a muscle and subsequently face a spell out of the side.

Sergio Aguero was given a painkiller spray for an ankle injury which caused an allergic reaction when Manchester City medics applied it. His foot became swollen and blistered which forced him to miss a crucial spell of the season before he returned to help seal Manchester City’s first title.

Can you kick it?

Street artists from Germany played a practical joke on England fans during the 2006 World Cup. A group of artists filled a shoe with concrete leaving a sign that read ‘Can u kick it?’ Needless to say a number of England fans ended up in hospital with severely swollen feet as a result.

Beaten at the airport

Former England great Kevin Keegan was subjected to a beating by airport customs officers after sitting on a baggage carousel at Belgrade. He was taken into caution by the same men and was later released with a badly bloody nose which suggested he should have known better than to have a laugh at the expense of the former Yugoslavia.

Believe it or not but a number of players have been injured because of television remotes. Former Spurs forward Robbie Keane and former Chelsea goalkeeper Carlo Cudicini both picked up knee injuries while reaching for the remote while David Seamen and David James both pulled muscles which forced them to miss matches.

Struck by a bolt

Jonathan Richter was in the wrong place at the wrong time in 2009 during a match in Copenhagen. A lightning storm saw the player struck which left him hospitalised in a coma. He recovered but the injuries he suffered force him to have part of his leg amputated.