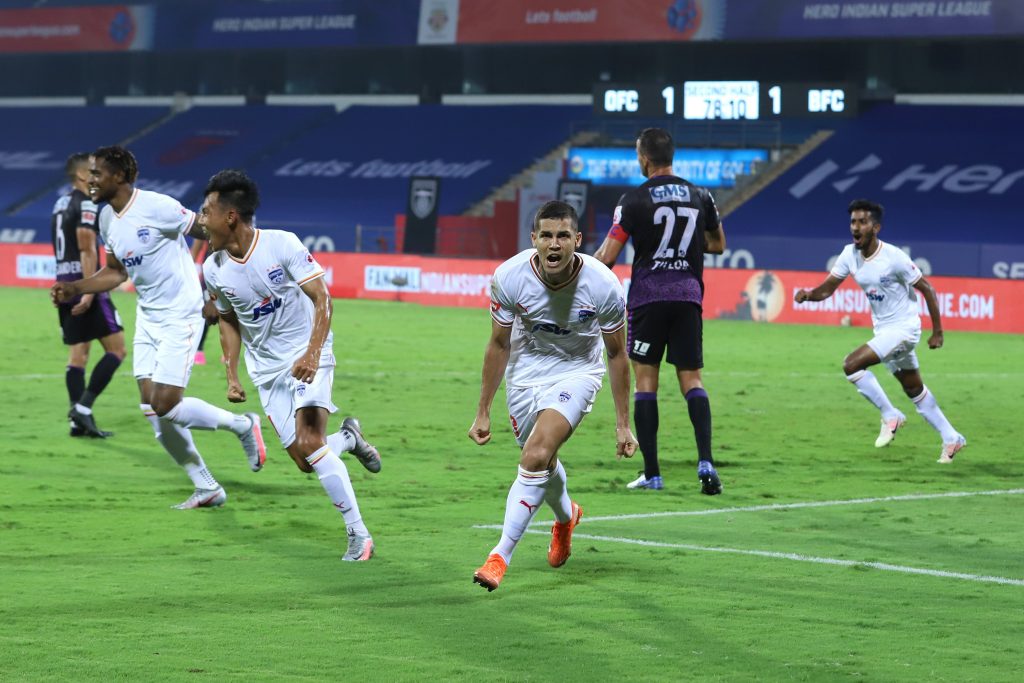 The Indian Super League’s seventh matchday kicked off with an intriguing clash between 10th-placed Odisha FC and 4th-placed Bengaluru FC. Stuart Baxter’s side were still searching for their first win of the season and they only had a point in the bag, while the Blues had maintained their unbeaten record.

An important clash was set to take place, and here’s what we made of it:

Benagluru FC had a good chance to score early on when Erik Paartalu’s deflected cross reached Kristian Opseth at the edge of the six-yard box, but he shinned it well wide. Then, Paartalu himself had a look in the fifth minute when he let fly from a fair distance but just missed it.

The Blues continued to look good and had another presentable opportunity in the 7th minute when the ball broke for Dimas Delgado at the edge of the box, but he launched it way over the crossbar.

Odisha started to get back into the match thereafter though, and they hit the back of the net in the 9th minute when Diego Maurício sent Marcel Onwu through on goal, but his strike was ruled out for a marginal offside call. A minute later, Onwu flashed a brilliant ball across the box for Maurício, who just couldn’t reach it for what would have been a simple tap-in.

Bengaluru finally broke the deadlock in the 38th minute when Harmanjot Khabra picked out Sunil Chhetri with a cross, and the Indian captain out-jumped Shubham Sarangi to power his header home.

Odisha had a couple of huge chances in the 61st minute when Shubham Sarangi delivered a low cross to Gaurav Bora, whose first shot was blocked by a crowd and his follow-up was deflected and later pushed away by Gurpreet Singh Sandhu.

Seven minutes later, Udanta Singh got up the right flank and flashed a ball across to Erik Paartalu at the edge of the box, but his first-time effort was well kept out by Arshdeep Singh.

However, it was Odisha FC who got the equaliser in the 71st minute when Steven Taylor found himself unmarked at the far post from Jerry Mawihmingthanga’s free-kick, and he poked it home.

Finally the Goal comes from #OdishaFC

Cleiton Silva… More like Late On Silva. Am I right guys?

So, Bengaluru FC came away with another crucial victory.

The Pressure is Truly On

With just one point from five matches, Odisha FC knew that they would have to start winning soon.

The Kalinga Warriors found themselves under a fair bit of pressure early on but might have felt a bit aggrieved when the assistant referee disallowed Diego Maurício’s finish for a contentious offside call. However, Odisha failed to win the battle in midfield, and they found themselves a goal down at the break as Bengaluru were able to control the tempo of the match.

The home side looked a lot more lively in the second half, though, as they started to push more men forward and found some joy on the wings, especially after Bengaluru switched to a back-three. They started to threaten a lot more from set-pieces, and eventually scored an equaliser from a free-kick. However, they couldn’t keep things tight at the back and ended up conceding again to undo their good work.

I hope we win atleast one match this season.😩

So, despite another good performance, Odisha FC have lost again. The lack of points and wins surely means that there is a fair bit of pressure building around Stuart Baxter.

Bengaluru FC had won two of their last three matches, so things were starting to look good for them – and they got even better today.

The Blues started the first half on a positive note, creating a number of good chances to score in the first 10 minutes, but failing to take any of them. They had to withstand a flurry of chances for their opponents after that, but then they started to control the match with Dimas Delgado dropping into a deeper role in midfield. It was all smooth sailing for the rest of the half, especially after Sunil Chhetri opened the scoring.

They would have wanted a simple second half to see out the win, but all of that went out of the window as Ashique Kuruniyan went off injured. This forced Carles Cuadrat to switch to a back-three, and his side lost a lot of attacking impetus on the left flank. Eventually, this allowed Odisha to equalise. That seemed to spur Bengaluru on though, as they made positive changes and quickly retook the lead.

Our lil' juggernaut moves on. The biggest one, next. #WeAreBFC #OFCBFC

With that, they secured another huge victory, with three points coming along with it.

If you Google the word ‘evergreen’, Sunil Chhetri’s name should absolutely pop up.

The now 36-year-old forward is showing no signs of slowing down, as he continues to work extremely hard up front for his side’s cause. Tonight, he opened the scoring with a thumping header, laying a mark on the Odisha FC defence. He even had to slot into the left-back role for a few minutes when Ashique went off, and he excelled there too.

11 – At 170 cms, @chetrisunil11 is one of the shortest strikers in the @IndSuperLeague. Since @bengalurufc's debut in the #ISL in 2017-18, the Indian captain has scored 11 headed goals, the most by any player with the head in the ISL. Prolific. #OFCBFC #LetsFootball #HeroISL pic.twitter.com/aGWFskVdof

The Indian captain needed 30 touches to create 2 chances, win 2/3 of his aerial duels and score with his only shot on target.

Yet another clinical performance.

Bengaluru FC move up to 3rd in the table thanks to Deshorn Brown’s first ISL assist, while Odisha FC stay in 10th place. Sunil Chhetri’s goal means that he has become the first Indian to reach 50 goal involvements in ISL history with 42 goals and eight assists.