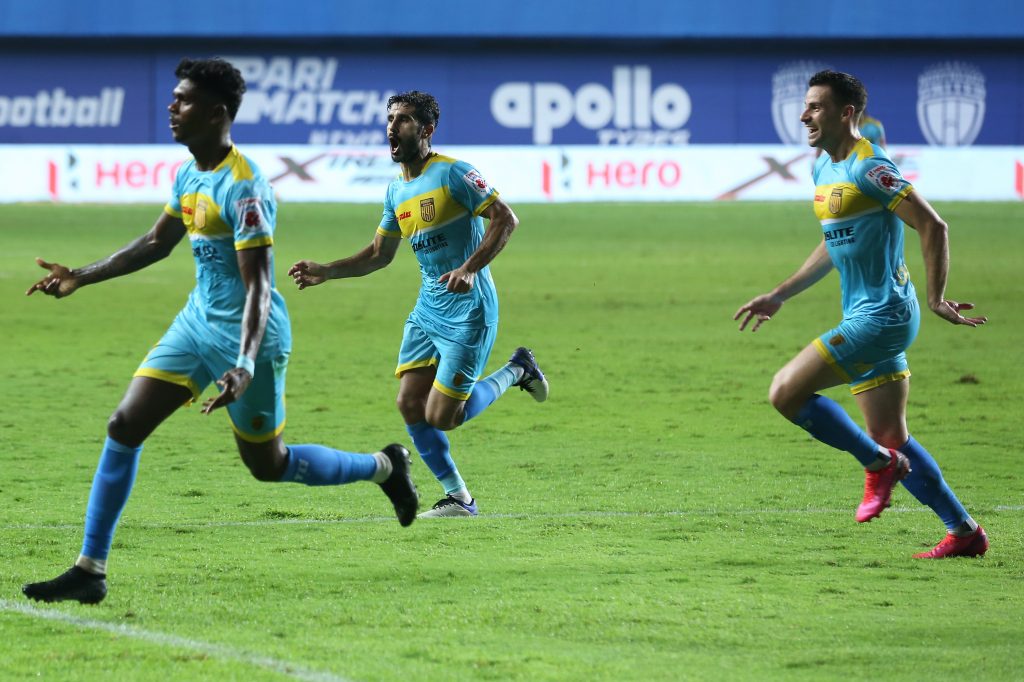 The 11th matchday of the Indian Super League got underway tonight, and the first match saw 7th-placed NorthEast United face Hyderabad FC, who were a spot above them in the table. The Highlanders were winless in five, so they desperately needed three points, while Hyderabad FC had rediscovered their mojo in that 4-1 success over Chennaiyin FC, so they wanted to build on that momentum. An important clash was set to ensue, and here’s what we made of it:

Within three minutes, Joel Chianese beat three defenders as he got to the byline on the right, turned inside and poked the ball across to Aridane Santana, who turned it in from close range.

Took what four players out by dribbling from the wings till the 6 yard box and putting it on a plate, brilliant

In the 13th minute, Federico Gallego whipped a free-kick towards Idrissa Syll, who had a free header about six yards away from goal, but he missed the target altogether. Two minutes later, Luís Machado beat his man and had a shooting opportunity from the edge of the box. His effort was going into the corner of the net, but Laxmikant Kattimani just managed to tip it onto the post and away for a corner. The keeper had to make another stop in the 29th minute when Idrissa Sylla’s shot from outside the box was threatening his net, so he got a hand to it and pushed it away for a corner. It was Hyderabad FC who scored next, though, as Akash Mishra turned the ball over high up the pitch when he blocked Benjamin Lambot’s attempted clearance. He nudged it towards Joel Chianese, who drove into the box past a couple of defenders and slotted home from close range.
Comment from discussion gunnersonfire’s comment from discussion "Match Thread: NorthEast United FC vs Hyderabad | Indian Super League".
NorthEast United had a great chance to pull one back in the 45th minute when Halicharan Narzary nudged Ashutosh Mehta at the edge of the box, causing the referee to award a penalty. Federico Gallego stepped up, and he sent it down the middle to make it 2-1. https://twitter.com/AlwaysAnkur/status/1347555987570401280 Just before half-time, NorthEast United completed their comeback. Ashutosh Mehta headed Fanai Lalrempuia’s cross towards goal from inside the six-yard box, but his shot was saved by Laxmikant Kattimani. A great scrap ensued on the goal-line involving three NorthEast players and the keeper, and eventually, Benjamin Lambot bundled it home.

What an end to the half pic.twitter.com/XPdNOgAfvn

26 seconds into the second half, Ashutosh Mehta squared a ball across the box to Luís Machado, whose first-time effort just cleared the crossbar. Just before the hour-mark, Machado had a hit from the edge of the box and aimed it towards the top corner, but Laxmikant Kattimani kept it out. Hyderabad FC’s next big chance came in the 80th minute when Halicharan Narzary found Joel Chianese at the edge of the box for a free header with his cross, but the Australian forward missed wide. A minute later, Aridane Santana found Narzary free on the left of the box, but he only hit the side-netting with his powerful shot. The Nizams finally took the lead in the 85th minute, as Liston Colaco received the ball on the right, waltzed past three opponents as he entered the box and finally finished in style with his left foot.

In the last minute of stoppage-time, Liston Colaco was played through on goal by Aridane Santana, and he slotted home to make it 4-2, which was how the match ended.

A five-game winless streak meant that NorthEast United’s strong start had come undone, but they still had time to bounce back and relaunch their push for the top-four. Things didn’t go to plan early on, though, as they conceded within three minutes following some pretty bad defending. One of the main culprits was Mashoor Shereef, a man making his second appearance of the season as he replaced Dylan Fox in the line-up. Benjamin Lambot wasn’t faultless either, as his poor clearance led to Hyderabad FC’s second goal. Things changed for the Highlanders thereafter, though, as they started to grow into the match and looked to be the better side. They didn’t take their chances until the 45th minute when Federico Gallego converted a penalty, and soon thereafter, Benjamin Lambot bundled the ball home for an equaliser. That must have been a great morale-booster going into half-time, and the home side looked better in the initial stages of the second period too. However, they couldn’t make it count and ended up conceding twice late on to lose yet again.

I'm done 🤦 Fir nahi haarna tha. The first two goals and the fourth one should have been avoided. Kya hi kar rahe the 🤷

But @Luismachado_7 taken out and Sylla misfiring? WHYYY? We don't deserve this.

This was a much-improved showing from NorthEast United, but it doesn’t make a difference to the league table unless accompanied by a result, which was absent once again.

After his side’s terrible 2-0 defeat against Kerala Blasters, Manuel Márquez Roca said that if he were the owner, he would contemplate the sacking of the manager. The Spaniard was much happier following their 4-1 win over Chennaiyin FC, though, and surely he would have wanted to keep that going tonight. Joel Chianese decided to gift his manager some more dopamine in the initial stages of the match, as his brilliant play set up Aridane Santana for the opener, and he scored a smart second thereafter. Hyderabad seemingly slumped after that, but their defence held out well until the very end of the first half when they let two in to undo all of their good work. Roca made a few changes going into the second half, notably switching his wingers as Halicharan Narzary (who had a torrid time dealing with Ashutosh Mehta in the first half) went to the right while Mohammed Yasir moved across to the left. That didn’t quite work, though, and the manager decided to take the latter off for Liston Colaco for his first substitution. That change worked a lot better, as the substitute bagged a goal in the 85th minute, before sealing the win with another in stoppage-time.

The most exciting team of the tournament with most exciting Indian players of the league & led by a humble, intelligent gaffer from the sidelines. All my love & respect to HFC, Manuel Marquez Roca & indian troops 💙 special mention for special boy Liston Colaco
#NEUHFC pic.twitter.com/AIhxA5ZugA

It’s two wins in two for Hyderabad FC now, whose push for a play-off spot looks well and truly back on now.

As far as super-subs go, they don’t get much better than Liston Colaco. The 22-year-old winger came on for Mohammad Yasir in the 64th minute but didn’t fare much better initially. However, he burst into life in the 85th minute when he cut inside from the right, beat three defenders and calmly finished for a change to bring up his first goal of the season. He celebrated that with another goal, racing through on goal in the last minute and showing great composure yet again to make it 4-2.

At some point, you have to give in to the Colaco hype.

The ex-FC Goa man needed just 14 touches to score with both of his shots, win 4/4 ground duels and complete 3/3 dribbles. Outstanding efficiency from the extremely talented youngster.

Joel Chianese’s campaign has been a bit stop-start so far, as two injuries have hampered his involvement in NorthEast United’s matches, but he seems to be back to his best now. The Australian attacker announced his return with a goal last time out, but he went one better tonight with a goal and assist. The latter came first, as he danced past a few defenders on the right flank before picking out Aridane Santana in the six-yard box. Then, he cut inside from the left and beat some more defenders before slotting home for a change to make it 2-0. He looked good for the rest of the match too, capping off a strong performance.

Chianese has been untouchable

The ex-Perth Glory man won 9/12 duels, completed 4/7 dribbles, attempted 4 shots and got 38 touches in a great display. A solid performance and a crucial win for Joel Chianese and Hyderabad FC.

NorthEast United stay in 7th place, while Hyderabad FC move up to 3rd in the table in part thanks to their fastest goal of the season and Liston Colaco’s first two goals of the campaign. The most goal-packed first half of ISL 2020/21 also saw Aridane Santan score his sixth goal of the season, Federico Gallego open his account and Benjamin Lambot bag his second of the campaign. NorthEast United face Bengaluru FC next on Tuesday, while Hyderabad FC take on Mumbai City on the 16th. Stats courtesy Sofascore.com