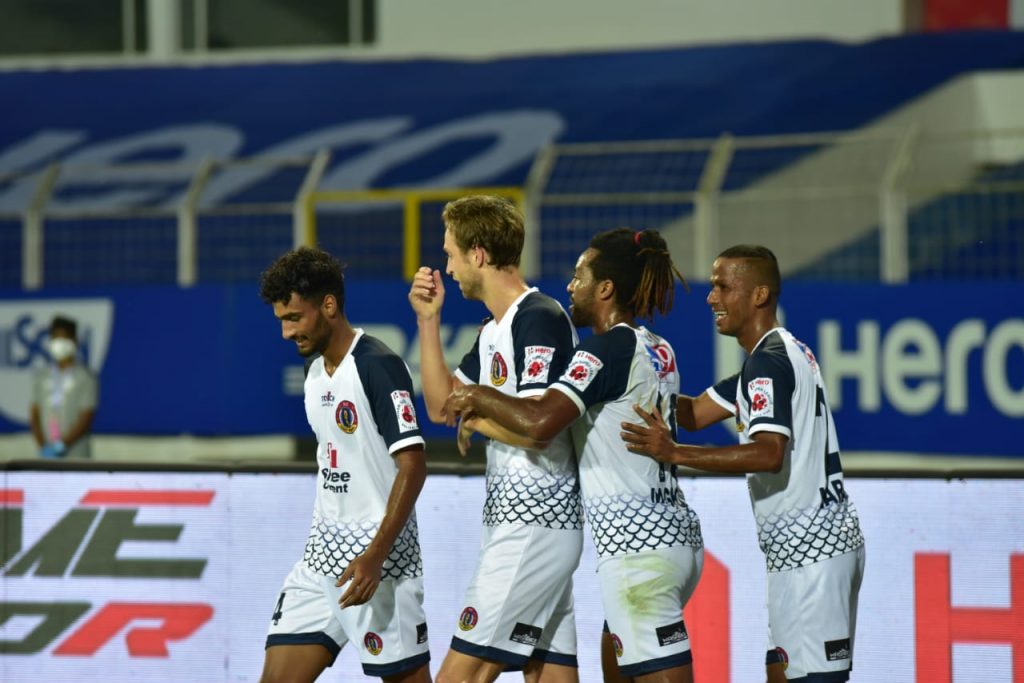 The only Saturday fixture of the Indian Super League was a very important clash, as 6th-placed Bengaluru FC faced 9th-placed SC East Bengal. The Blues had gone on their longest losing streak in ISL history, and coach Carles Cuadrat lost his job as a result of that, so Naushad Moosa was taking interim charge for the first time tonight. Meanwhile, the Red and Gold Brigade were resurgent as they were unbeaten in four, so they were arguably the favourites. An intriguing battle was set to ensue, and here’s what we made of it:

Bengaluru FC pressed well early on, and nearly scored in the 15th minute when Parag Shrivas’ long throw reached Cleiton Silva in the six-yard box after Juanan flicked it on, but his low header just bounced over the crossbar. However, it was SC East Bengal who took the lead in the 20th minute when Narayan Das played the ball across the box from the left, and Matti Steinmann guided the ball in with the outside of his boot.

Das could have made it 2-0 in the 26th minute as Ankit Mukherjee delivered a low cross towards him, but the ball came at him too fast and he missed wide. Seven minutes later, Erik Paartalu had a hit from outside the box at the other end, but it was kept out by Debjit Majumder. Bengaluru FC’s next big chance came in the 48th minute when Sunil Chhetri exchanged a one-two with Kristian Opseth and let a volley fly towards the top corner from the left of the box, but Debjit was equal to it once again. Chhetri came close to scoring again in the 62nd minute when he opened up a shooting angle at the edge of the box, but yet again, Debjit denied him. 16 minutes later, Bright Enobakhare turned the ball over in the attacking third and opened a shooting angle at the edge of the box, but his effort was tipped away by Gurpreet Singh Sandhu. Bright then went through on goal from the halfway line after outpacing a defender in the 82nd minute, but Gurpreet came out and just about got a touch on the ball to prevent the ex-Wolves man from shooting. East Bengal held out well in the end and came away with a deserved 1-0 win.

After three defeats in a row, head coach Carles Cuadrat paid with his job for Bengaluru FC’s poor form. Naushad Moosa, his assistant, was tasked with steadying the ship until the club found a successor, but tonight, the result didn’t change. The interim manager did make a few alterations to the Blues’ lineup and system, though, as neither Kristian Opseth nor Deshron Brown was given a starting birth as Cleiton Silva operated as a striker. Dimas Delgado was deployed much further ahead in midfield, forming a sort of a 4-2-3-1 with Udanta Singh on the right wing. In defence, Parag Shrivas and Ajith Kumar got their first starts at right-back and left-back respectively, meaning that Rahul Bheke was finally restored to centre-back. The home side started off well, pressing high up the pitch and with good intensity. However, soon thereafter, their defence started to get exposed, and they conceded within 20 minutes. For the rest of the first half, they never looked like threatening East Bengal, so Moosa had a crucial team talk to deliver. He must have said something right, as the Blues looked a lot better in the second half, creating some good openings but always being thwarted by Debjit Majumder. After the substitutions, though, their push for an equaliser fell away and they had to resign to another defeat.

#BFCSCEB #WeAreBFC The good parts. Moosa looks comfortable. He got the tactics right in the second half. And we got a bunch of youngsters blooded. And waves of attacks. Time to look forward. Well played SCEB. Fowler is always a love. Truly it was a game of halves and GKs.

If anything sums up this chaotic night for Bengaluru FC, it is the fact that Rahul Bheke started as a centre-back, switched to right-back in the second half and finished at left-back. So, the Blues have the same problems to solve, albeit with a different mind at the top.

East Bengal are Back

The start of the season was nothing short of disastrous for SC East Bengal, as they were languishing at the bottom of the table and looked way out of their depth. Robbie Fowler cut a frustrated figure on the touchline, and some fans were even calling for his sacking. Things have turned around for the ISL newcomers now, though, as they are looking to be a much-improved side, especially with Bright Enobakhare in the mix. Robbie Fowler wasn’t on the touchline tonight owing to a one-match suspension, but his boys did just as well. They sustained some early pressure from Bengaluru FC, before seizing control of the match by scoring in the 20th minute. They held on to it too, easing into half-time with a comfortable 1-0 lead. Their opponents grew stronger in the second half, but for once, the East Bengal defence held out very strongly. Credit must be given to Tony Grant, the main man on the touchline, who got his tactics spot on tonight. First of all, he utilised his wing-backs perfectly in the first half to push the Bengaluru wingers back and render them pretty ineffective in attack. Then, in the second half, he crucially brought on Aaron Amadi-Holloway up front to provide a fresh outlet for his under-pressure defence – a man who would hold the ball up and draw fouls or try to buy as much time as possible.

Good – another win! Better – a complete team performance! Best – yet to come! Watch out for us.#JoyEastBengal

This was perhaps SC East Bengal’s best performance of the season, as the squad looked coherent and compact and excelled in almost all departments of the game.

East Bengal’s defence did a very good job in this match, but when they were breached, Debjit Majumder proved unbeatable. The Indian goalkeeper wasn’t kept too busy in the first half, but he did a good job of keeping things clean at the back. He was really tested in the second period, though, when he had to make a number of fine saves to keep a clean sheet. Sunil Chhetri, in particular, proved to be his greatest adversary, but the East Bengal man won the battle with some splendid stops, including a frontrunner for Save of the Week.

Even as a rival fan. So, so happy to see the revival of Debjit Majumder.
After a few rough yrs,. Debjit seems to be back to his best. Always rated him highly, so found the fall surprising Tonight ensured all 3 points for SCEB
But where do BFC go from here#BFCSCEB #LetsFootball

The ex-Mohun Bagan man made 5 important saves, including 2 from shots inside the box in the match, while also winning all of his aerial duels. A match-winning display at the back.

Bengaluru FC stay in sixth place with their fourth consecutive loss, and SC East Bengal also hold position on goal difference with a five-match unbeaten streak. Matti Steinmann got his third goal of the season, while his side’s second ISL Clean sheet secured the three points for them. Bengaluru FC face NorthEast United next on Tuesday, while SC East Bengal take on Kerala Blasters on Friday. Stats courtesy Sofascore.com