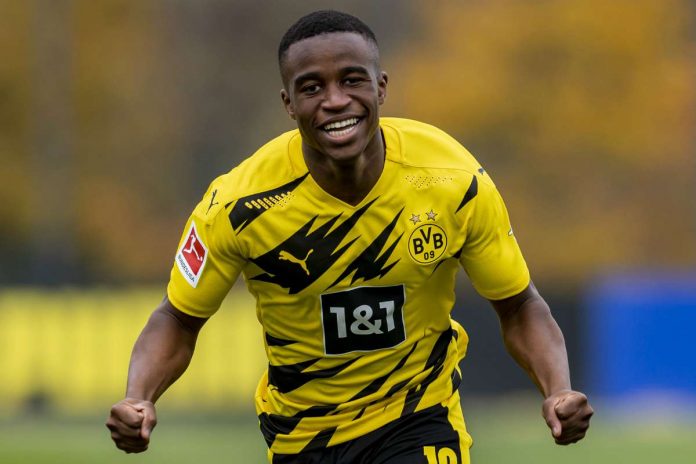 A true precocious talent, Youssoufa Moukoko is the delight of Borussia Dortmund’s youth teams. Serial scorer in the lower categories with 141 goals scored and 27 assists delivered in 190 matches played with the U17s and U19s, the German youth international had also marked German football by becoming the youngest player in the history of the Bundesliga to play a first division match at 16.

Supposed to represent the future of BVB, Moukoko might be craving for a change of scenery!

Bild indeed assures that the player would like to pack up and not extend his current contract which expires in 2023. The reason is simple: Moukoko believes that his club cannot give him the necessary guarantees concerning his playing time. It is difficult for the Germans to guarantee him playing time at the moment. However, the young striker’s decision comes as no surprise.

On January 25, his agent Patrick Williams already gave an indication about the future.

“It is not obvious that Youssoufa extends with BVB. Yes, he has been set back a bit by injuries this season. Yes, the competition at BVB is of course fierce. But the game time he needs at the current stage of his career is hardly getting to Dortmund at the moment. Of course, we think about what is best for the future.”

But Bild assures that BVB, who are almost guaranteed to also lose Erling Haaland this summer, have no plans make Moukoko a guaranteed starter for next season.

Clearly, if the Norwegian giant leaves, the club will bet big on Karim Adeyemi, a player they have been widely linked with. And if the Salzburg player arrives, Donyell Malen will be the back up. The former PSV player is not yet shining (4 goals in the Bundesliga), but Dortmund want to make a profit from a player bought for €30 million last summer.

Faced with this observation, Youssoufa Moukoko is therefore considering his options.