We’re all used to the tales of players’ strange habits and obsessive behavior – like Ronaldo insisting he’s the last to step off the coach and having his hair cut at half time – but managers can be just as idiosyncratic too.

There are countless tales of bizarre rituals and extraordinary rants in post-match interviews so it’s hard to pick just three – but we think we’ve managed it.

It’s better on a bucket

The fact that his nickname is El Loco tells you all you need to know about the Argentinian manager of Leeds United. As soon as he arrived at Elland Road, he started to make his mark by choosing to sit on a tub to watch matches – soon dubbed The Bielsa Bucket by the media. He claimed it allowed him to get closer to the action than sitting in the dugout. He has also been known, in the face of a heavy loss, to strip naked at the end of the match and lie on the changing room’s treatment table for up to an hour while he processes what went wrong. 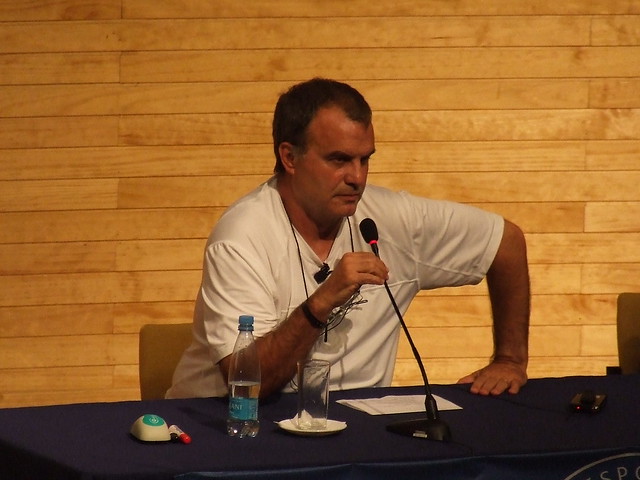 Any color, as long as it’s black

Throughout his career, Maurizio Sarri has plowed his own particular furrow in management style. One of the most notable incidents came when he was managing Chelsea and insisted that the entire team wore black boots. While this was far from popular amongst the boot manufacturers who rely on their styles being instantly recognizable, there was method in his madness and they won.

Other quirks he has displayed have included refusing to ever touch the match ball and insisting that every member of the team sits at the same place in the club restaurant whenever they are on a victorious streak.

Like Bielsa, there’s a method in his madness. Not only is he one of the few Chelsea managers to leave before he was pushed, but he also saw the team to Europa League victory with the longest-ever run of victories in the competition.

It’s not just the modern game that has thrown up some eccentric managers, they’ve always existed. Franklin Charles Buckley, manager of Wolverhampton Wanderers between 1927 and 1944, had a distinguished record in WW1. He used this to bring some military-style thinking to the team. On match days when he considered the ground too hard to suit the team’s strengths, he called in the fire department to water the pitch. He also encouraged all players to take up ballroom dancing to improve their balance.

So, it all goes to show that managers don’t always have to be the sensible figures keeping the team in line, there’s plenty of room for self-expression too – and it can even lead to great success if properly deployed.