India
Home News would you buy portsmouth for 5

We’re running out of jokes on Portsmouth now. Ownership changes have bordered on the ridiculous, but more than that, the Premier League’s inaction to protect / help one of their own can only be described as criminal inaction.

It’s not so much about Pompey’s debts being trivial in comparison to United’s (a better measure of the severity of debt is the assets to liabilities ratio) but that after the leveraged buyouts of Manchester United and Liverpool, after Manchester City and after West Ham, the Premier League STILL hasn’t tightened up the rules to ensure that what’s happening at Portsmouth – a worsening situation since 2008 – can be stopped in time.

In fact, the Premier League seems content to penalise Portsmouth for the mistakes of its owners, and to gently usher the club to the Football League with not so much as a arm around the shoulder but with a shove and ‘don’t let the door hit you on your way out’ attitude.

Portsmouth are, as much as West Ham, prime victims of the financial downturn. Funding that would have potentially built a new stadium and taken Portsmouth out of debt (or at least into manageable debt) turned into banks calling back on their loans, and without a proper stadium, with training facilities rented and wages over and above what the turnover would allow (not least to the chairman Peter Storrie, one of the highest paid chairmen in English football), it’s been a depressing collapse to watch from the sidelines.

My sympathies with Portsmouth fans – you may support the wrong club but no football fan should be put through the wringer because of off-the-field shenanigans that could have, should have been stopped quite some time ago.

Hats off to you, Premier League, for waving Portsmouth goodbye as they lurch towards administration. Of course, with clubs with bigger stadiums and better support playing in the Championship, why would they help keep a lesser club up? 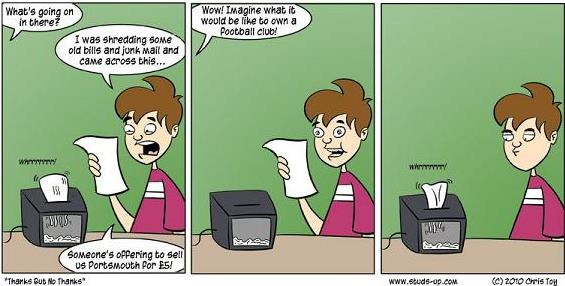 Studs Up by Chris Toy.