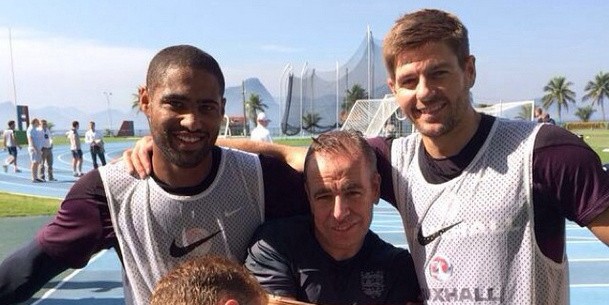 To celebrate team masseur Paul ‘Smally’ Small’s 50th birthday, a few mischievious members of the England team, including captain Steven Gerrard, thought it fun to play a wee prank on the staff member, with an ice bath dunk the climax of what turned into a team bonding session in the Brazilian heat on Tuesday.

Gerrard was joined by Glen Johnson and keeper Joe Hart in strapping Smally to a plastic chair, carrying him into the midst of a team gathering, and finally dunking the birthday boy into a paddling pool of icy hell!

Daniel Sturridge was one of the players to have filmed the prank, shouting to the victim on his way to his frozen doom whether he had his phone on him during the short clip!

Check out Sturridge’s video, which he posted on his Instagram, below, with captain Gerrard also uploading some prank goodness to his own page:

The last few days, we’ve posted videos of a camel called Shaheen giving his World Cup predictions, following on from the huge precedent set by Paul the Octopus in the 2010 World Cup.

I love the guy, with his fluffy lips and awkward demeanor; but I will be keeping an eye on his ‘accuracy’, for as much as I enjoy seeing him (but hating the moronic, laddish catchphrase of the English presenter), I have to keep the World Cup in mind, and will be giving Shaheen a two strikes rule.

Last week, he went for Portugal (which was far from the right pick), so today’s choice needs to be on the money, or I’ll have to search elsewhere for a lovable creature to pin my hopes on!

‘Rivaldo’s Gamble’: When it all comes crumbling down…

After yesterday’s predictions fell flat, I’ve got to buck up my ideas, or risk going up in a puff of smoke. Russia and Brazil let me down on gameday five, with worried audiences seeing the amount of draws at the 2014 World Cup treble in one day!

Check out my latest predictions below, and click on the games for the Soccerlens preview!

Australia 0-3 Netherlands: Van Gaal’s gladiators to power past the Socceroos

Spain 2-1 Chile: I’d be made to bet against the Spanish, despite their hammering last week

Cameroon 0-2 Croatia: With a host of star players, Croatia are certainly a good side, which shouldn’t be forgotten after an unlucky loss to the Selecao on opening night.