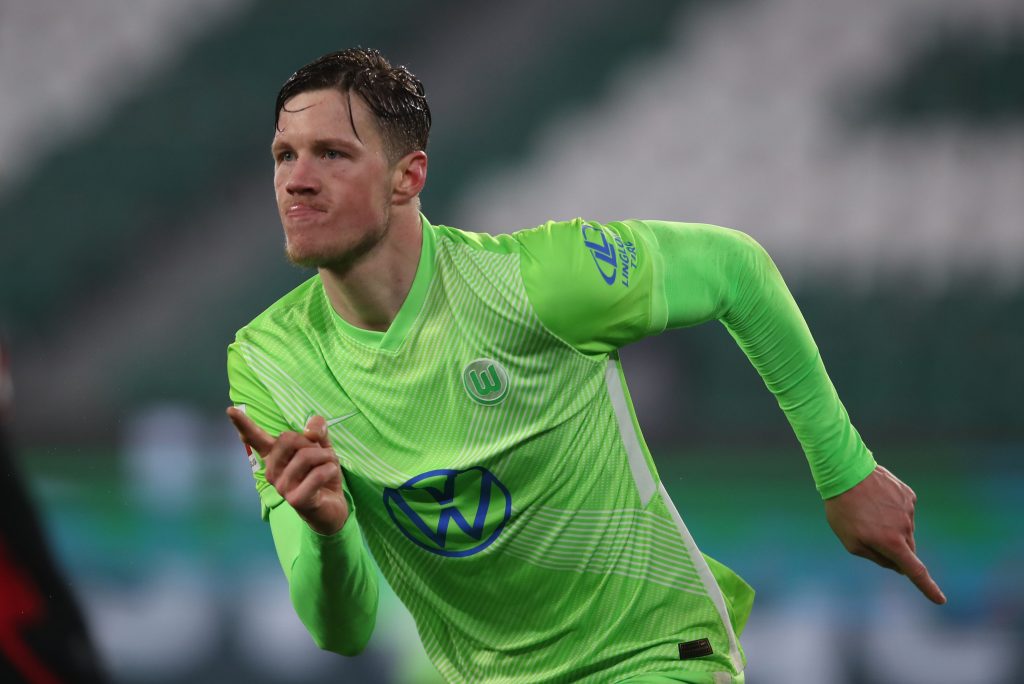 There is always quality talent that doesn’t get the recognition it deserves and Wolfsburg striker Wout Weghorst is certainly one of those players.

Weghorst has been absolutely clinical during his three-year tenure at Volkswagen Arena. By far the club’s most reliable finisher, the Dutchman joined from Eredivisie outfit AZ Alkmaar in 2018 after bagging 31 goals in 60 appearances for the side.

This term alone, Weghorst has already netted 16 times in 23 competitive matches for the Wolves, including 12 goals in the Bundesliga. His impressive form is a vital reason Oliver Glasner’s side are currently in fourth place and well in the fight for a spot in Europe.

The 28-year old seems happy at Wolfsburg and recently, sporting director Marcel Schäfer made it known that no clubs have contacted him regarding Weghorst’s availability in the January transfer window.

There were some rumours swirling around in the summer that Tottenham Hotspur were monitoring the striker’s situation in Germany, but nothing materialised. Arsenal have also shown interest in Weghorst previously, but a move never came to fruition.

Big transfers don’t usually happen in January and Weghorst is currently valued at €30 million, according to Transfermarkt. Although we won’t see the Dutch hitman take the next step in his career this month, it would be no surprise to see Weghorst move to a more notable club this summer because he is seriously that talented.

One of the most underrated strikers in Europe

Weghorst has been hitting the back of the net at an insanely high rate since joining Wolfsburg. He’s scored 45 league goals in just 84 appearances already.

However, Weghorst tends to fly under the radar with his consistency in the final third because of the club he plays for. The 6’5″ striker has bagged at least 15 goals in each of his first two seasons with the Wolves, banging home 17 in 2018/19 after the summer transfer from AZ Alkmaar.

Last term, Weghorst has the same number of goals as Sergio Aguero, Luis Suarez and Edin Dzeko, who are all well-known strikers throughout the continent. As for his impact at Wolfsburg, he’s already within the top five of most goals scored at the club.

Even Bayern gaffer Hansi Flick had high praise for Weghorst after their 2-1 victory over the Wolves on Matchday 12, calling him one of the best strikers in the league, per Bundesliga.com:

Weghorst has proven to be key to his side’s success over the last two and a half years. Even when he has a poor showing, Weghorst can still manage to capitalise on an opportunity and fire home a goal. Matchday 11 was a perfect example where the striker didn’t play that well. Down 1-0 late in the second half, Weghorst still managed to score a brace and secure the three points for Wolfsburg over Frankfurt.

The natural instinct that he has in front of goal simply can’t be taught. However, his impact goes a lot further than just scoring. Weghorst often retreats back into his own half to put pressure on oppositions as Wolfsburg tries to gain back possession. His ability to close down opponents and create turnovers is crucial to the build-up of attack for the Wolves. As a central striker, his work rate is phenomenal.

A goal-machine in the box

Similar to Bayern’s Robert Lewandowski, Weghorst is lethal within the 18-yard box. His anticipation for the final ball has resulted in loads of goals. In fact, it’s very rare that Weghorst even scores from outside the box or for that matter, even right inside it.

The majority of his goals come within 15 yards or less from the net. Just like Lewandowski, Weghorst receives tremendous service at all times from his Wolfsburg teammates. But without his natural sense for the game, these scoring opportunities wouldn’t happen so frequently.

He isn’t the quickest, but Weghorst has a phenomenal idea of where to be inside the box. Whether it’s a through ball between defenders or a whipping cross, it’s seldom that Wout Weghorst fails to capitalize.

Built for the Premier League

Spurs currently have a world-class duo up top in Harry Kane and Heung-min Son, but the addition of Wout Weghorst in North London would be worth it. The Premier League is often hailed as the best in Europe, and for good reason. It’s physical, competitive, and a lot of the English giants always end up in the latter stages of European competitions.

Weghorst is physically built for England. A lot of players tend to have a tough time adjusting to the strength and grittiness of the Premier League but it wouldn’t be a problem. for Weghorst. He is a hard-working player who covers a ton of ground and contributes in both halves.

Whether it’s Tottenham who signs the Dutchman or any other club in England’s top flight for that matter, they would be getting arguably one of the most underrated strikers in the world.

Wout Weghorst has proven his worth in a very strong league in the Bundesliga. At 28 years of age, it’s time for the next step. Expect Weghorst to be a hot commodity in the summer transfer window.