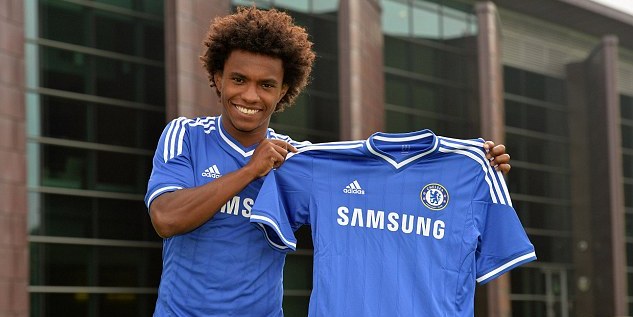 Before Jose Mourinho starts his customary mind games, Chelsea’s new signing Willian has already stoked the fire by stating that Chelsea are a better club than Tottenham in every aspect.

The Brazilian star said last night that he always wanted to go to Chelsea and is happy to play under Jose Mourinho.

Willian in an interview with Brazilian paper Globoesporte, said: “I always wanted to go to Chelsea. Chelsea presented an offer and it was always my dream to go there.

“Chelsea is a better club than Tottenham in every aspect. I have spoken with my fellow Brazilians at the club, especially David Luiz. I am also happy to play for Jose Mourinho. That was definitive in my decision.”

The situation was probably bit different, if one could recollect what happened in the summer. Willian was first targeted by Liverpool and the Reds were willing to pay €30 million, but Spurs hijacked the deal right under their noses.

And when it seemed like Willian was set to become yet another marquee signing for Tottenham this summer, as he was supposed to have medical, a quick change of heart turned tables. Chelsea came calling in the 11th hour with a better offer and the Brazilian was off to Stamford Bridge, without giving a second thought.

It is indeed true that Chelsea have a strong contingent of Brazilian players and it was always going to be decisive for him while choosing a club. The question is, didn’t he consult with Sandro or Paulinho (who already joined then) when he was all set to complete his medical?

Oh, we forgot. He always wanted to go to Chelsea.