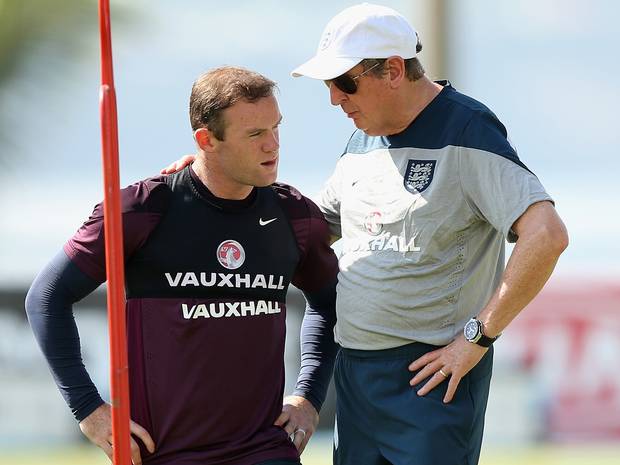 England take on Uruguay in a crucial matchup in the 2014 World Cup. Both nations were defeated in their openers meaning they will almost certainly need to avoid defeat tonight if they are to remain in the competition.

Much of the hyper building up to the match is about what position Wayne Rooney should play. He received a lot of criticism after Roy Hodgson lined him up on the left wing in defeat to Italy on Saturday.

Reports suggest that Rooney will play in the number 10 role behind Daniel Sturridge for the encounter with Uruguay, with Danny Welbeck and Raheem Sterling occupying the wide positions.

Bookmakers have reportedly taken £10 million in bets on the Manchester United striker to score tonight. Wayne Rooney was off target with all 3 of his attempts in the opening game, taking his record to 0 goals in 9 World Cup matches.

Wayne Rooney is 2.50 to score anytime

The Italian defence, as they seemingly always are were strong in preventing England with many clear-cut opportunities aside from Daniel Sturridge’s goal on a fast break that was assisted with Rooney’s left foot from the left wing.

Uruguay however do not have a solid defence. It didn’t even look stable in their 3-1 loss to Costa Rica.

The South American side allowed only 4 shots on goal against the minnows from Central America but Galatasaray goalkeeper Fernando Muslera didn’t have a chance with 3 of them.

Óscar Tabárez’s side were notable weak at defending set pieces. This is where the second goal came from when Oscar Duarte virtually had a free header inside the 6-yard box from Christian Bolaños’ free kick out on the right. A set piece cross that Steven Gerrard is more than capable of making.

Costa Rica’s equaliser four minutes before they took the lead came via some slow and slack defending. A cross into the box was tucked away by an unmarked Joel Campbell. He was the only striker on the pitch. Are Uruguay going to give Daniel Sturridge similar space tonight?

Daniel Sturridge is the more attractive selection at 2.80 to score anytime

The pace of Marcos Ureña as Uruguay pushed forward in search for an equaliser caught them out for the third goal. But should England take the lead, they have the pace of Raheem Sterling and Danny Welbeck on the wings to get in behind the opposition defence.
Indeed defending may be Uruguay’s biggest issue tonight. Right-back Maxi Perreira is suspended and centre-back Diego Lugano has been ruled out through injury. That’s two of the back four that started their opener.

As for the options available for Tabárez, it doesn’t read too well. I would guess the back four from right-to-left may look like this: Martín Cáceres, Sebastián Coates, Diego Godín, Jorge Fucile.

With the exception of Coates, the other three have 40+ caps at international level.

However, only Godín and Cáceres have played in more than half of their club’s matches this season. The table below shows the lack of first-team football Óscar Tabárez’s has actually played this past season:

Maxi Perreira’s suspension in terms of game time and experience is a big loss to Uruguay.

With the number of Liverpool players in the squad, England should have a fairly good understanding of Sebastián Coates’ abilities. Failing to break into the Liverpool side last season he spent the second half on loan back in his home country with Nacional.

So can Wayne Rooney score against this Uruguay defence? I’ve been really disappointed with his England performances in major tournaments for a number of years now but I really believe he and England can finally excite our fans in a World Cup for the first time since 2002, tonight.

England to win is a recommended 2.05 bet

England to beat both Uruguay and Costa Rica is 3.03