Five Wigan players who may follow Roberto Martinez to Everton 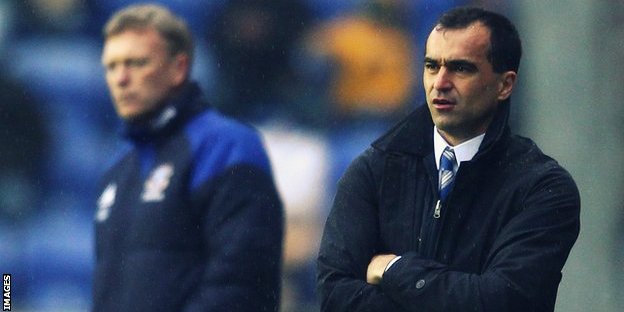 Wigan chairman Dave Whelan has announced the club have agreed a compensation package with Everton for manager Roberto Martinez.

After a four year spell with the club, Martinez decided to move on after Wigan were relegated down to the Championship and he will be named as the new Everton manager.

That opens up the debate over which promising players from Wigan may follow him to Everton, with several of the current Wigan squad linked with high profile moves away from the now championship side.

Here are five players who could be tempted into following Martinez to Everton.

The 28-year-old Dutch full back was notorious last season for his flying runs up and down the right wing for the club, as he made 11 starts and six appearances as a substitute.

He is a free agent at the end of June, which may appeal to Everton, a side that has not had much cash to spend while other Premier League teams spend tens of millions on single players.

The possibility of him following Martinez to Everton depends on what happens with Seamus Coleman and how Martinez wants to use the Irishman, who was one of the best right backs in the Premier League last season.

McArthur’s performances as almost a complete midfielder have led to several links away from Wigan, most notably to Liverpool and Manchester United.

He owes his development to Martinez and that sense of loyalty he may feel towards the Spaniard could make a transfer to Everton more appealing than to any of the higher profile teams he’s been linked to.

His contract doesn’t expire until the summer of 2016, which will make a deal more difficult for the Toffees to pull off. There is also the added factor of a bidding war should he become officially available.

McArthy started every single one of Wigan’s games last season and he has top London clubs Arsenal and Chelsea circling him like sharks.

Similarly to McArthur, he owes his development and progression to Martinez and he may want to avoid a move to London, which he could see as risking his immediate career and possibly his chances of playing for Scotland.

He’s an extremely fit box-to-box midfielder who does a lot of hard work in the middle of the pitch, making him a reliable and consistent proposition for Everton.

McManaman is a player with an Everton past having already spent part of his football career with the club as a youth.

His performance in the FA Cup final against Manchester City was stunning, proving that he can be very effective against the top sides. His pace and skill on the ball is frightening.

This will be the hardest deal for Everton to pull off if they go after it because his end of season performances last season mean some big clubs will be ready to throw cash at this potential deal but at 22-years-old he could choose to trust Martinez.

Maloney is slightly on the older side at 30-years-old but he was arguably Wigan’s most creative player last season.

He scored six goals and provided nine assists from all Premier League appearances and his versatility as a striker and a winger could be very useful to Everton over the 2013/2014 Premier League season.

The fee for Maloney wouldn’t be as high as the fees for either McArthur or McArthy because of his age and the fact his contract expires in 2015, a year earlier than either of them.