Brendan Rodgers and Roberto Martinez could take the Merseyside rivalry between Liverpool and Everton in a very different direction next season but both bosses are under pressure.

They were neck and neck last season with Everton just finishing ahead of Liverpool, which is something that the fans from the red half of the county won’t be willing to accept for a third season running.

The expectation at Liverpool is to push for a top four place and considering the faith that has been shown in Brendan Rodgers, he’s now under big pressure to deliver just that.

Liverpool will also be expected to start the season in a much better vein of form than they did last year, which means the pressure is going to be cranked right up if Liverpool start losing games early next season.

The Liverpool fans will firstly want the club to be better than Everton in all departments and will secondly want the guarantee of European football by the time the season is over. Rodgers said:

“I believe we will improve again and we have to because we want to sustain a challenge.

“I think we can do but it will be a tough ask because as we improve other clubs will have masses more money to improve also.”

Liverpool’s supporters have had to endure an awful lot of hardship in the recent past and they will be crying out for something to sing and shout about.

Rodgers seems to have a very good relationship with them, which is very important because it will give him time to sort things out if small pockets of supporters start getting on his back after poor results.

Trophy expectations at Liverpool will be limited and confined to the domestic tournaments because the club are still some considerable way off being able to challenge for the Premier League.

Roberto Martinez faces an entirely different situation with Everton where the expectation at the club has just got a lot higher. 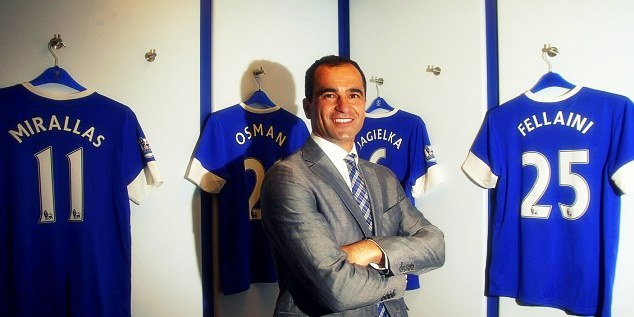 The main pressure will come in the form of what David Moyes left behind. He has to maintain the advantage the club had over Liverpool last season and he has to push for at least Europa League football.

If Everton struggle early on and slip into the bottom half of the table, there will be more than just grumblings of discontent because the club have come to expect much more. Pressure is going to grow quickly over him from the fans if the club doesn’t live up to the sort of football his reputation guarantees.

The FA Cup final against Manchester City showed that he can get a group of underdogs to completely play bigger sides off the park and if he doesn’t live up to that the fans won’t be impressed.

Moyes has left behind a relatively stable club, established in the top group of sides in England, now looking to push onto the next level and if Martinez can’t deliver that, fans will start calling for his head.

In terms of silverware, Everton will expect goo runs in both the FA Cup and the League Cup because Martinez has proved to be very effective in both of those competitions.

On the balance of things Martinez looks more set to get the sack first but Liverpool have invested a lot of time and interest in Rodgers and how long that lasts is anyone’s guess.