With Sir Trevor Brooking saying that England want to appoint a young English coach to gain experience and eventually replace Fabio Capello in the national side hot-seat, Peter Jackson analyses the favourites and outsiders for the role…

The 48-year old gained many plaudits after he took the under-21 side to the European championship final in 2009 and has been in the England set-up since 2007.

This experience with the younger pool of players coming through surely gives him an advantage over other candidates? The former Manchester City boss has used the likes of Jack Rodwell and Micah Richards recently, players ignored by Fabio Capello despite impressing for club and country.

If he takes over after Euro 2012 you feel that he would have the trust and respect of the players after being a bridge between the players and the Italian Disciplinarian in both the qualifying rounds and the disastrous world cup campaign over in South Africa.

If you forget the short shorts and ridiculous white socks, which I know is difficult, you get the impression that he is committed to the team and wants to lead the team out in the future. I hope he wears a suit if he does.

However, anyone who was a Manchester City fan in his last season in charge, 2006/2007, will turn a shade of purple when they hear the Hammersmith born man’s name mentioned and with good reason as well.

Just 10 home goals were scored in the last season of his tenure at Eastland’s and a defensive 4-5-1 formation wouldn’t sit well with fans and players alike. In addition, it was reported on the 14th July by the Daily Star, bear with me, that Capello planned to cut Pearce from his back-room staff in a sign that perhaps the former England left-back was only at the World cup because of his under-21 job.

Verdict: as a City fan myself, I can’t envisage having to be held down if the denfence-minded coach took over, nor if he was announced as a future successor being groomed for the job. Come to think of it, I’m not even happy with him being involved at the moment. He oozes mediocrity and boredom so from me, It’s a NO.

He may look like a 16-year old geek who’s just had his lunch money nicked, but Southgate is a favourite among many to take this new role and with good reason.

The former Boro boss is young, level-headed and seemingly knowledgeable about the game we all love. His performance as an ITV pundit, for what it’s worth, was very impressive and often insightful. However I’d probably look like an expert sat alongside Patrick Viera and Andy Townsend.

He kept Middlesbrough up for two seasons with a rapidly decreasing budget and the range of players available squeezing in to just local players.

He brought through Adam Johnson and sold Stuart Downing to Aston Villa for a good price and was fired from the club despite being one point away from the top of the Championship table.

The former Aston Villa defender seems modest and wouldn’t demand the ridiculous salary that the current manager earns. He has a wealth of experience as an England player, despite that penalty miss in 1996, and can also console others.

The reason I say this is because I remember in 2002 when David Seamen let a Ronaldinho free-kick loop over his head and eliminate us from the tournament in Eastern-Asia. Southgate was the first to come over to the former Arsenal stopper and put his arm round his shoulder and sympathised. This gives the impression of a personal character, again unlike Capello, and one who would be able to demand respect and remain professional.

This is not a view shared by the Boro fans I asked though. The Teessiders I spoke to were scathing in their attacks. One described him as ‘naive’ and another stated ‘he had a bad rapport with the fans’. Whilst their collective opinions were summed up with the phrase ‘He didn’t have a Scooby’.

He did take down the north-eastern side, finishing above West Brom but below rivals Newcastle, after losing the chance to stay up when being beaten by the Geordies 3-1 in the crunch game of the season.

Verdict: At the moment he may be a bit of a soft touch. But with close attention and experience with the national set-up I feel he could go on to do a very good job with the nation which he represented 57 times. Fresh, calm and aware means I’m going with YES.

Many look at ex-Newcastle star as a failure in management after his 8 game stint in charge of his home-town club but let’s analyse it more closely. Not only did he not have sufficient time to keep his beloved team up, Iain Dowie was the man pulling the strings in the background showing that Shearer was not trusted, or not good enough, to do the job independently.

After England’s elimination from the world cup he was clearly distressed, for want of a better word, and you almost thought he was about to run out of the studio to berate the team and coaches alike.

Yes, that’s one thing he does have, passion. The 40-year old gave us all something to smile about as he danced down the touchline when Newcastle beat Gareth Southgate’s Boro at St James’ park, or should that be ‘[email protected]’.

Whatever it is, he makes up for lack of coaching experience with a genuine care for both club and country. Despite this, his performance on MOTD over the summer was enough to convince some that he didn’t have a clue what he was talking about.

In addition, whoever was the real manager when he took over at Newcastle two years ago, just 5 points accumulated from a possible 24 doesn’t make me optimistic. When he had to pull all his players over to the side of the pitch away at Spurs to explain where they were all meant to be positioned you just felt a surge of utter desperation and failure. 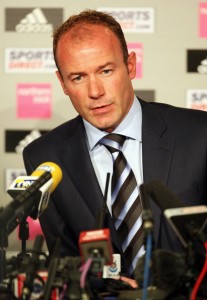 Verdict: He said that Newcastle was the only team who he would have helped out when he took over and perhaps that may reign true again if he was asked. My feelings are that he simply isn’t good enough to be in charge of our national team and I’ll have to go with NO.