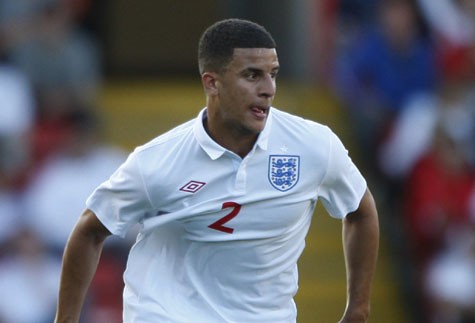 On Tuesday night Tottenham’s youngster, Kyle Walker, who made his debut on Saturday started his first England game. The promising defender is the 4th player named Walker to have a have represented his country.

This of course led to the inevitable question:

What surname has appeared on the England team sheet the most?

It is no surprise to see this traditional name at the top; however, the name has not proved to be that successful at International level. Despite a record number of appearances there were no Smiths in the 1966 or 1990 squads, England’s two best performances at a World Cup to date. The most recent Smiths were the two Alan Smiths. One of them an ungainly former Arsenal striker and the other a former Manchester United tough tackling striker/midfielder. Neither of whom set the international world alight.

With two Johnson’s in the current squad it would be easy to forget the other far less successful members of this clan. There is the legendary, for all the wrong reasons, Seth Johnson. This tough tackling midfielder is one of the buys that typified Leeds United’s financial ruin. The former Crewe Alexander and Derby player cost ₤7million and was paid wages in excess of ₤30,000 a week, despite only asking for ₤10,000. There is also the Fulham man Andy with 8 caps, who quite scarily, looks like a bald and slightly uglier David Beckham.

For close to a generation not a single player had represented England called Brown, until former Manchester United defender, stumbled on to the scene. With 23 caps to his name he is the most capped Brown in English football history. What that says of all the other Brown’s, I leave for you to decide.

At Italia ’90, England were struggling and possibly facing elimination or the Germans in the 2nd round, that was until the ball struck the face of Mark Wright and England defeated Egypt 1-0. This Wright helped give England the tears, that volley, those missed penalties and thousands of “Where were you when Waddle smacked it out of the stadium?” stories. There have been some legendary Wrights over the years, the late great Billy Wright, Ian Wright, Shaun Wright-Phillips and Richard Wright. Right?

A name you would perhaps associate with Wales more than England, has appeared 7 times but failed to hit the heights. Until a couple of months ago the last Jones to feature for England was Rob, the former Liverpool full back. Now though, the name looks like it is on the up with Man United versatile man Phil Jones establishing himself as one for the future.

With seven appearances it is interesting to note that a Roberts hasn’t played for England since 1984, when former Spurs man Graham represented the Three Lions. It is a poor return for such a common name. The stand out Roberts is without doubt the three cap wonder from 1890, the imaginatively named former West Brom keeper Robert Roberts.

This name has a mixed footballing tradition. Brought to prominence in the 80′s and early 90′s, by one family who spawned four professionals: Clive, Bradley, Martin and Paul, however, only of them, the legendary Spurs striker, Clive, went on to feature for England. He was the last Allen to represent England back in 1988.

This name had a great tradition for England, but perhaps is now better known as a reference to a turnip and a San Marino goal. Interestingly, one Taylor who won 5 caps, went on to manage England for one game, former Leicester and Wycombe coach Peter. His claim to fame is that he was the first to give Beckham the captaincy, his other claim to fame was thinking Ade Akinbiyi was good enough for the English Premier League.

This surname boasts two players who captured the hearts of their club fans. Sammy Lee and Franny Lee, however, both represented England for only a short time. Since then the only other Lee to play for the Three Lions was Newcastle United midfielder Rob Lee, who quite surprisingly knocked up 21 caps. How that happened remains a mystery.

On Saturday Kyle became the fourth Walker to represent England, and surprisingly the third in 23 years. Before him was defensive maestro Des and keeper Ian. The former Spurs keeper man collected four caps in an international career that spanned 8 years. The other Walker was Aston Villa legend, Billy. Many Villa fans believe he was their greatest ever player, when compared to Juan Pablo Angel, or Savo Milosevic that accolade doesn’t look too great.

For those of you interested, there is one Bastard to have represented England. That wasn’t this week, but back in 1880, when a Segar Bastard wore the Three Lions jersey.