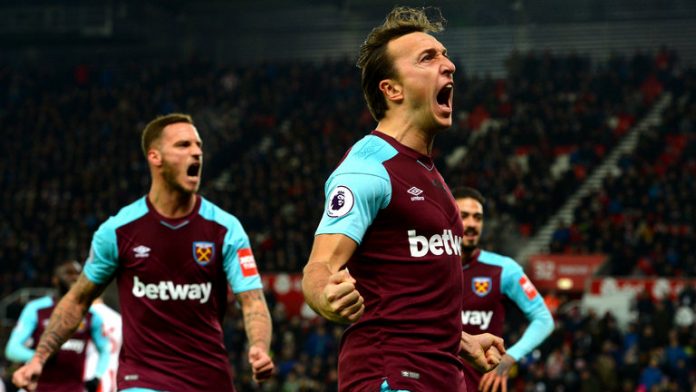 West Ham United could take a massive step towards safety when they host Stoke City in the Premier League on Monday.

The Hammers are currently 15th in the table, six points above the relegation zone with six games to play.

Stoke are deep in trouble, six points adrift of safety but with only five matches remaining.

West Ham have won one and drawn five of their last seven meetings with Stoke, but they haven’t beaten them at home since 2011.

Mark Noble, Marko Arnautovic and Diafra Sakho got the goals for the Hammers in their 3-0 victory at Stoke back in December.

We're unchanged but good to see Lanzini and Carroll back in the squad!#WHUSTK #COYI pic.twitter.com/drctpyZQ5N

? One change for the Potters against @WestHamUtd this evening, @KurtZouma replaces Glen Johnson in the starting line-up.