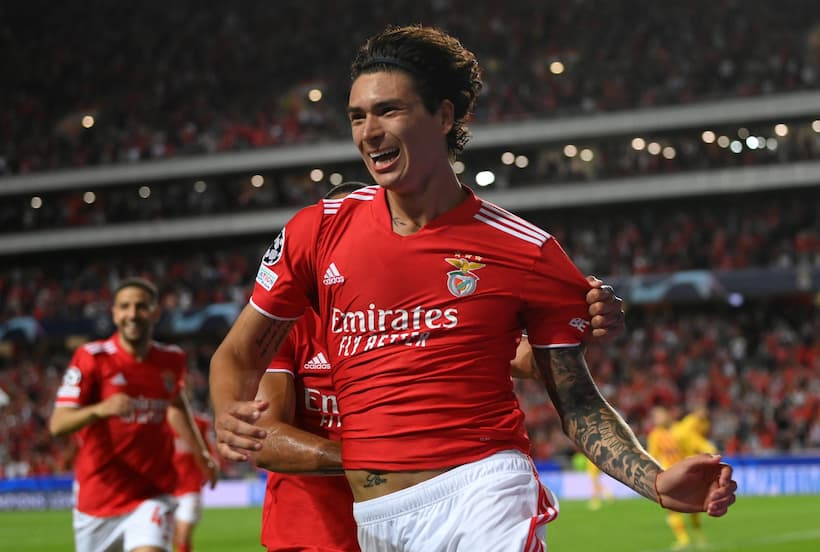 West Ham are looking to pull off an ambitious move for the Benfica striker Darwin Nunez on deadline day.
According to a report from Sky Sports, the Premier League side have already agreed on a fee with the Portuguese outfit for the 22-year-old Uruguayan international.
Nunez is regarded as one of the most exciting attacking prospects in European football right now and he has been in scintillating form for Benfica this season.

The striker has 20 goals in 25 appearances for the Portuguese outfit and he could prove to be an exceptional long term acquisition for the hammers.
West Ham are lacking a specialist goalscorer right now and they have had to rely on winger Michail Antonio to lead the line.
Signing Nunez will add a cutting edge in front of the goal and it would also allow players like Antonio to play in their natural positions.
Check out the best football betting sites
The report from Sky Sports claims that there is very little time left in the January transfer window and therefore sorting out the logistics of the transfer could be a difficult task.
Furthermore, the striker is currently away with the Uruguayan international squad for their World Cup qualifier against Venezuela on Tuesday.
It remains to be seen whether the two parties can accelerate the formalities and finalise the move before Monday’s transfer deadline.
Nunez has proven his quality in the Portuguese League and in the Champions League with Benfica and the chance to join a Premier League club could be a tempting proposition for him.
The 22-year-old is still quite young and he will have plenty of opportunities to join a top club if he manages to impress with West Ham.
The Hammers are looking to secure Champions League football for next season and if they can bring in someone like Nunez in January, it would lift the whole squad and elevate the quality of the side as well.