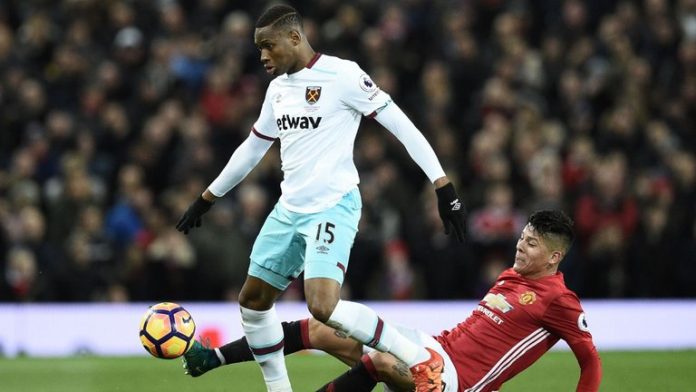 Pablo Zabaleta has urged Diafra Sakho to knuckle down and fight for his place after being denied a move away from West Ham during the transfer window.

Sakho tried to engineer a move to Rennes on deadline day, but the Hammers refused to sanction a transfer to the French club.

The Senegal forward has scored goals in the Premier League, Carabao Cup and 2018 FIFA World Cup qualifiers in recent weeks and Zabaleta is eager for his teammate to continue to work hard.

“I’m a new player here and I don’t know Diaf’s situation from last season or three or two seasons ago or whenever but, when the transfer window closed, Diaf was a West Ham player and he has given everything because he is important for this club and is a great player.

“He has done a fantastic job for this club, so he needs to fight for a place, show the manager he is worthy of a place in the team and that’s it.

“The best way to do it was like he did against Swansea, coming on, making runs, working hard and scoring goals.

“That is the only way to show the manager you are worth a place in the team and that healthy competition between everyone has to be like this.

“I understand that every player cannot play every week. This is the manager’s job, thinking what is best for the team.

“As a player, I’ve been dropped many times and the only way I can show I am worthy of a place in the team is by performing and working hard – this is what it’s all about.”

Sakho’s antics on deadline day were certainly bizarre, but three goals in his past four appearances for club and country have shown his potential.

With Javier Hernandez yet to impress in a West Ham shirt, Sakho has a golden opportunity to cement a place in the first team over the coming weeks.

Hernandez was on target for Mexico on Friday, but an Andy Carroll/Sakho partnership could well be West Ham’s best option as they look to climb up the Premier League table.