Welcome to Liverpool, Rodgers – it’s Top Four or the Door 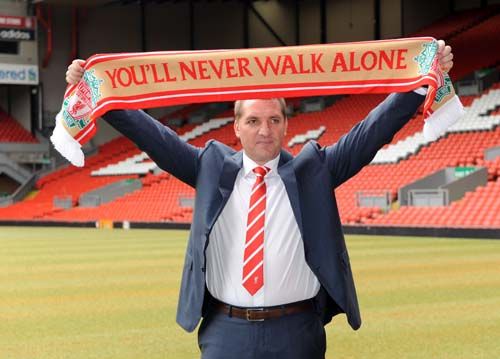 Top four may not be a divine right for any club in the premier league given the competition has increased immensely over the past few years. Still the Manchester clubs remain clear favorites, Blue side with their versatile squad plus cash and Red side with their stability. Chelsea have already secured highly rated Belgian Hazard and are in pursuit of signing another hot prospect in the form of Porto’s Hulk to make sure they do not fall out of champions league places next season. Tottenham may lose star players looking for CL football and have a weakened squad, on the contrary Arsenal will attract stars to aim for the top again.

Where does this leave Liverpool and their new manager Brendan Rodgers? Having failed to finish in top four for the past three seasons, reds have not been able to sign top quality players and for worst have lost their stars as well. Since Benitez left the club in 2010, the club has been falling down and every season looked more like a mid-table side than a champions league contender.

Brendan Rodgers has impressed the footballing world with his Swansea team playing beautiful football last season, out-passing not only top opponents in the premier league but their passing accuracy has been right up there with the very best teams across Europe.

One may say that even under Dalglish Liverpool at times played eye catching football only to end up drawing or losing most of the times. Poor finishing, luck, take your pick but one of the main reasons behind their failure was losing the ball far too often crucially in the midfield. That is where Brendan Rodgers has to step up and make sure the players do not lose the ball and pass it well. His thoughts are clear:

“I like to control games. I like to be responsible for our own destiny. If you are better than your opponent with the ball you have a 79 per cent chance of winning the game. For me it is quite logical. It doesn’t matter how big or small you are, if you don’t have the ball you can’t score.” – Rodgers

Swansea’s quality of football was evident that he showed last season against the likes of Chelsea, Arsenal and new employers Liverpool. Controlling possession, not losing the ball, working through diverse channels, continuing pressure ultimately means guiding the play and are the basics of Tiki-Taka football.

“My template for everything is organization. With the ball you have to know the movement patterns, the rotation, the fluidity and positioning of the team.” – Rodgers

Over the years Liverpool have relied too heavily on two or three players and even spending around 50 million on midfielders last season, still Steven Gerrard, now 32, remains their best midfielder. For Liverpool to be successful, Rodgers has to demolish this over reliance and get everyone involved in the system. For that he must have sufficient cash to spend and authority to implement his methods.

Whether or not Rodgers’ methodology is a success at Liverpool is the major question. The fans cannot start expecting that reds will be playing like Barcelona next season. Tiki-Taka football cannot be adopted perfectly in just a single season and combined with players who do not have calmness on the ball, it can be virtually impossible.  The passing game became Swansea’s tradition long before Rodgers actually joined them. Sousa and Martinez laid the foundation that Rodgers successfully kept alive and did wonders last season. Eventually it will take time, whether it will be on his side, remains to be seen.

Having earned himself a job many fancied, Brendan Rodgers surely knows the task on hand is one of the hardest in English football. Although Liverpool owners did claim that they have long terms plan with Rodgers in charge but certain aspects should be clear to the new manager. He may have agreed compensation with Fenway Sports Group but he should never forget the major agreement i.e. failing to qualify for Champions League may as well cost him his job or should I say will cost him the job.