Liverpool have the opportunity to close the gap on Manchester City when they kick off at 3pm against West Brom.

The home side start the weekend eight points above the relegation zone but having lost three of their last four matches.

Brendan Rodgers’ side are seven points behind Manchester City for the last UEFA Champions League place, but with a game in hand. The Citizens don’t kick off until 5.30pm on Saturday, versus the side who eliminated Liverpool in the FA Cup last weekend, Aston Villa.

Goalkeeper Ben Foster is out with a knee injury so Boaz Myhill starts his fifth consecutive game. Andrew Wisdom is ineligible to face his parent club. The young right-back played 20 minutes last weekend – his first action since the end of January.

Youssouf Mulumbu is the only other absentee to Tony Pulis – the holding midfielder is suspended.

Liverpool are still without Mamadou Sakho so Dejan Lovren can come in on the left-hand side of a back three.

Jordon Ibe is fit and available once again whilst Adam Lallana could make his return this weekend also. Lucas has a thigh injury but could be back in time for the midweek game versus Hull City.

Daniel Sturridge has played only 45 minutes in April and could miss out again this weekend. 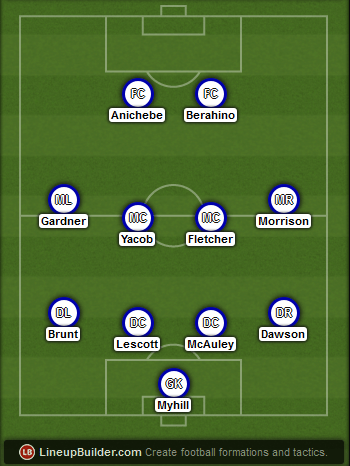 Tony Pulis lines up with a 4-4-2 formation – Victor Anichebe to support Saido Berahino up front. The young Englishman is without a goal in his last five Premier League matches. Anichebe only has two goals in 18 league appearances this season. Chris Brunt is playing at left-back under the former Stoke and Crystal Palace manager – could be troublesome as Liverpool have pacey options on that wing. Craig Gardner played on the left-hand side of midfield in the 2-0 victory at Crystal Palace last weekend and could remain there with Darren Fletcher and Claudio Yacob occupying the centre. 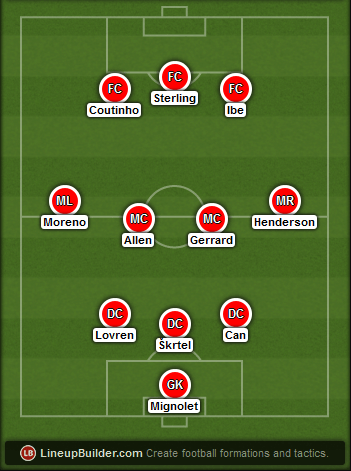 Another opportunity for Dejan Lovren to try prove his worth to his manager following a £20 million move in the summer that has so far failed to live up to expectations. Needing to win their remaining matches, we see Jordan Henderson playing out on the right as he’s been Liverpool’s best player out there this season. Lucas’ injury opens up another opportunity for Steven Gerrard to start. Jordon Ibe should compete with Lazar Marković for that right wing role as Raheem Sterling gets pushed inside during Daniel Sturridge’s absence.

Jordon Ibe vs Chris Brunt
Chris Brunt is not a defender and West Brom have conceded a few goals of late, including three in their last home game, versus Leicester City, and four at home to Queens Park Rangers before that one. Jordon Ibe has pace and loves to take on defenders – he has the real potential to cause the Northern Irishman some problems in this match. Capable of cutting inside and getting a good shot away too.

Philippe Coutinho vs Craig Dawson
Tony Pulis has a centre-back playing at right-back and with the form Philippe Coutinho is in he can really show Craig Dawson up on Saturday. The Brazilian will look run at the makeshift full-back and look to get a shot away when he cuts inside, where in or outside of the penalty area. Coutinho is a playmaker too, who will be supported by the likes of Raheem Sterling, Steven Gerrard and Jordan Henderson, all capable of finding the back of the net.

Saido Berahino vs Dejan Lovren
West Brom should offer good threat on the counter attack through the pace of Saido Berahino. He scored in the 2-1 loss at Anfield earlier this season and coming up against Dejan Lovren should be a favourable match up for the Baggies. The Croatian defender has really struggled against opponents running at him this season and Berahino loves to do just that. Whether it’s winning a penalty or getting himself in goalscoring positions, we can really see the young West Brom striker causing Liverpool problems this weekend.

6 – Tony Pulis is unbeaten in all six Premier League matches at home to Liverpool (W3, D3).

13 – Simon Mignolet is currently the joint leader in clean sheets amongst goalkeepers this season, along with Southampton’s injured Fraser Forster.

499 – Steven Gerrard is one match away from making his 500th Premier League appearance.