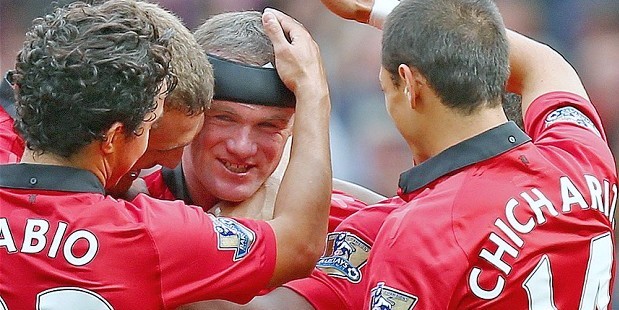 It was nice to see Wayne Rooney starting against Crystal Palace this weekend. The Manchester United’s maverick star had picked up a nasty head injury that forced him out for England’s World Cup qualifiers and a trip to Anfield before that, but he was fit enough to play with a head-band on Saturday. And he looked sharp as well, scoring a magnificent goal with a finely taken free-kick, as United won comfortably 2-0 against Palace at Old Trafford.

The future of Wayne Rooney was well speculated in the media throughout the summer. The 27-year-old fell out with previous manager Sir Alex Ferguson, while David Moyes said in the pre-season that Rooney would play as a second-fiddle to Robin van Persie, which left the England star angry and confused.

Last season, Ferguson played Rooney out of his position (especially in the midfield) on number of times, but Moyes doesn’t see Rooney playing in the midfield role anytime soon. Rather, he wants the former Everton star to forge a lethal partnership with Dutchman Robin van Persie and expects the England striker to score at least 30 goals for the club this season.

Moyes said as quoted in the Guardian:

“I can only see Wayne playing up top and playing as a forward for us,”

“The hope is that we get a partnership where folk are saying, ‘My goodness we are having to play against Robin van Persie and Wayne Rooney’. Everybody is looking to see if those two form a partnership that can score lots of goals.”

Well, we all know what a fully fit Wayne Rooney can do to any team. Against Palace, Rooney created four brilliant chances for his team-mates, while exchanged nine passes with Van Persie during the match.

Rooney is a versatile forward who can adjust to different roles, but he looks best when deployed in the No 10 role, behind the striker. Moyes is doing the right thing by playing him in his usual role. Wayne, are you happy now?