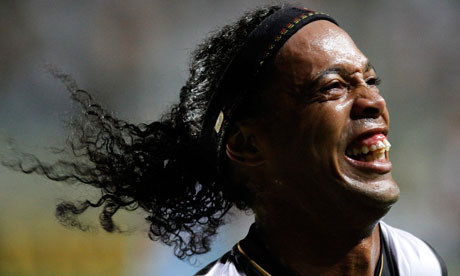 He hasn’t lost it. He might have left his best years behind, he might play in the Brazilian League, might be out of contention for the World Cup squad, but he hasn’t lost it.

Ronaldinho Gaucho was born as a magician, played his life as a magician, and at the apogee of his career, still is a wizard. He hasn’t lost that Midas touch of his.

During his hey days with Barcelona, he mesmerized the entire globe with his god-gifted skills and wide range of goals. He not only scored some magical solo goals that fetched him standing ovations even at the den of Barcelona’s fiercest rivals, but he was the master when it came to free-kicks (extraordinary goal against Chelsea) as well.

In the latest Brasileirao match, Atletico Mineiro drew 2-2 with Fluminense, but the central talking point of the match was Ronaldinho’s two sensational free-kicks.

Enjoy both the goals in this clip.