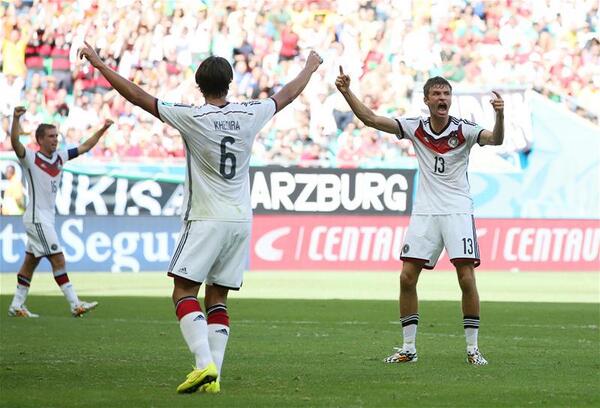 Germany kick-started their World Cup campaign with a ruthless 4-0 win as Joachim Löw’s side waltzed past a hapless Portuguese side at the Arena Fonte Nova in Salvador. 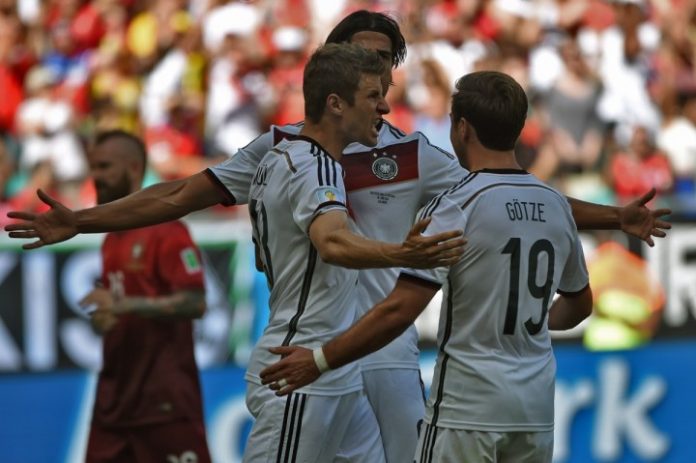 Thomas Muller was back at his imperious best, scoring a hattrick, while defender Mats Hummels also scored with a thumping header to give the 1990 World Cup winners a glorious start in Brazil.

Check out all the goals below, including the mad Pepe’s rush of blood red card:

1. Muller gave the Germans an early lead from the spot after Joao Pereira brought down Mario Gotze with a needless tackle from behind.

2. Borussia Dortmund defender Mats Hummels then doubled the lead with a thumping header from a wonderfully taken Toni Kroos corner.

3. It soon went from bad to worse for Paulo Bento’s side as Real Madrid defender Pepe inexplicably headbutted Muller after the latter was visibly caught playacting from the replays following the defender’s trailing arm on his face.

4. Germany soon made it 3-0 as Muller bagged his second of the afternoon after Bruno Alves failed to trap Kroos’ ball into the box, but goalkeeper Rui Patricio should have done better to stop the goal-bound effort.

5. The demolition was complete as Muller grabbed his hattrick, and Germany’s fourth, with a simple tap in following a lovely low driven cross from substitute Andre Schurrle which Patricio could only palm to the striker’s path.