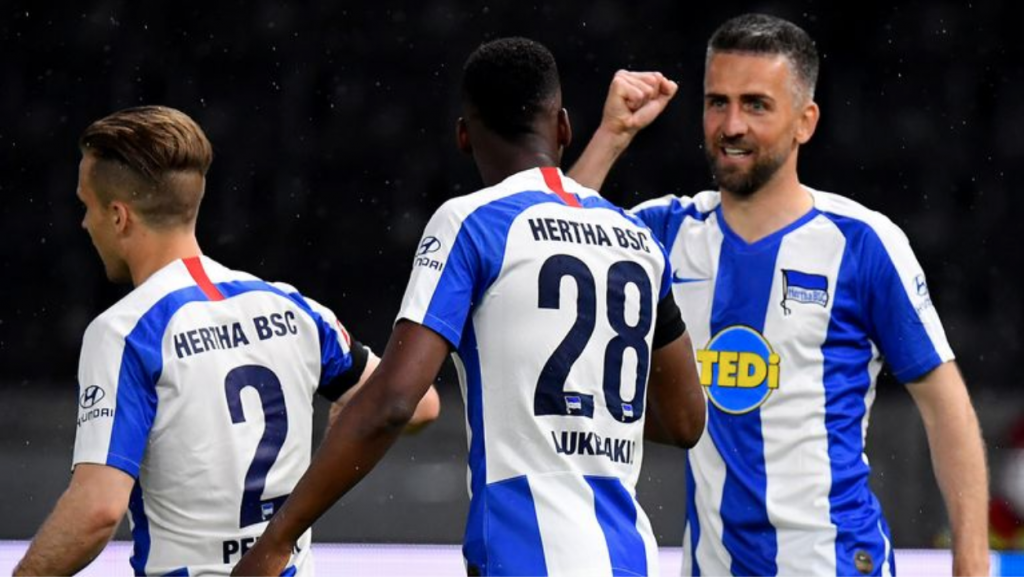 Hertha Berlin started the Berlin Derby with far more possession and attacking threat, as Union set up their customary defensive counter-attacking system. The first half so a couple of decent chances for Hertha, most notably when Lukebakio went through on goal, but Gikiewicz was able to keep everything out. Union mainly threatened through set-pieces but couldn’t force Jarstein to do too much.

The second half saw Union pushing a lot more, and Hertha found spaces through the middle, which they thoroughly exploited with two goals in 68 seconds. First, Plattenhardt whipped in a perfect cross for Ibisevic, who headed home. Then, the 35-year-old striker turned provider, as he played Lukebakio through, who went around the Union keeper and made it 2-0.

Soon, Cunha was able to find space on the left, dribble around at the edge of the box, attempt to play a pass which fell back to him, and then slot one into the bottom corner for his fourth goal in four games. Boyata then made it four after a free header from a corner. After that, it was a stroll to the final whistle.

The lack of fans was a shame for Hertha, as they got revenge for the 1-0 loss to their Eastern rivals on Matchday 10 with the second 4-0 derby thrashing in the Bundesliga in a week, following Dortmund’s Revierderby triumph.

Hertha dominated possession, as Union looked to absorb the pressure and threaten on the counter. Union blocked the center of the park, forcing Hertha to play wide in the wings. The West Berliners were able to get their wide attackers and full-backs into the game, but all of their crosses were repelled by a determined Union defence. Union were unable to do much from open play, and relied on set-pieces for their chances.

Bülter vs Pekarik – Pekarik was able to contain the Union winger for most parts of the game, as Bülter tried his best to affect the game as much as he could. Pekarik was far more threatening going forward, as Bülter (and Reichel) were not able to stop his tormenting runs. But Bülter was a half-effective outlet for Union, and arguably most influential in their direct attacks.

Andersson vs Hertha Centre-backs – The Hertha Centre-backs, particularly Boyata, were able to contain Andersson. Although the Swede is top of the list for aerial challenges won in the Bundesliga, he was nullified by a determined display by the two centre-backs.

Rune Jarstein – Was largely a spectator. 7.
Peter Pekarik – Tormented down the right flank, but his final balls could have been better. Defensively,he was sound. 7.
Dedryck Boyata – Was very effective in containing Andersson. Solid overall as he won all of his challenges, had the most touches of any player in the match, and got an easy goal through a free header from a corner. 8.5.
Jordan Torunarigha – A solid partner to Boyata. Though not as good as him, he had a solid match, and will be happy with a clean sheet as any defender would be. 7.75.
Marvin Plattenhardt – Did well to keep Ingvartsen out of the game, and was also threatening going forward. Brilliant cross for the first goal, and a decent delivery for the fourth. 8.
Vladmir Darida – He grew into the game, especially in the second half when he saw more space through the middle, and was allowed to make runs. 6.5.
Marko Grujic – Played his holding midfield role very effectively. Denied Union any chances on the counter, and kept the Hertha back-line relatively threat-free. 7.
Per Skjelbred – Did well to drift wide from midfield and impact the game, especially to the left. Was far more effective in the second half just like Darida. 7.
Matheus Cunha – There was absolutely no doubt that this man would put in an impressive performance, but this was simply amazing. He ran the Hertha attack throughout the game, drew many fouls in the first half, and then tormented Union in the second before scoring a brilliant goal to make it 3-0. 8.
Dodi Lukebakio – Worked his socks off, especially while tracking back, but failed to make a mark in attack. Had a big chance when he was through on goal early on in the first half, but he failed to beat Gikiewicz. But he made up for it in the second half when he went around Gikiewicz and scored. 7.5.
Vedad Ibisevic – Trademark display from the Czech veteran. He worked very hard as he often tracked back to recover possession, and his heading prowess and general attacking intelligence were the main source of chances for Hertha, like when he put Lukebakio through after wining a header, or drilled a threatening cross for Cunha in the first half. Scored Hertha’s first goal with a thumping header, and then set up the second with a perfect through ball. Also bagged an assist for Cunha’s goal. He was a major defensive asset as well. 9.
Subs:
Maximilian Mittelstädt – Was a good threat in attacking midfield since he came on. 6.25.
Javairô Dilrosun – Was a constant threat down the right from the moment he came on. 6.75.
Krzysztof Piątek – Not quite as effective as Ibisevic, but you can;t blame him when they were 4-0 up aleady. 6.
Team – A brilliant performance from the German Old Lady. They dominated the game from start to finish. They were sound both defensively as well as in attack. Their finishing was clinical, and their general attacking play was great, especially in the second half. The second half performance was perhaps the best from them in this entire season, and they look to be on the up now. 8.5.

Rafał Gikiewicz – Made multiple important saves, most notably when he kept Lukebakio out in the first half. You can;t really blame him for the goals. 7.25.

Marvin Friedrich – Was good in the first half, as he contained Ibisevic to his best. But the second half was not remotely good. 5.5.

Florian Hübner – Half-decent in the first half but shambolic in the second. 4.

Christopher Trimmel – Worked hard down the right to contain Cunha as best as he could. His set-piece deliveries were on-point and managed to threaten Hertha every time, but he couldn’t get any fruit. Overall it was a decent performance in an otherwise miserable day for Union. 7.25.

Robert Andrich – Was the only one who got any shots for Union from open play, but only through his free-kick and largely nonthreatening long shots. Otherwise he couldn’t do much. Managed to keep Hertha away from the middle in the first half, but not quite in the second. 5.5.

Grischa Prömel – Decent showing in the first half to block Hertha from coming down the middle, but he was completely exposed in the second. 5.

Ken Reichel – Decent display from the 33 year-old in only his second game of the season. Did well to deny Pekarik and Lukebakio too much space on the right flank, but he couldn’t really affect the game. 4.

Marcus Ingvartsen – Was ineffective for the majority of the game. Couldn’t affect the attack and couldn’t stop Plattenhardt from setting up the opener. 3.5.

Marius Bülter – Played decently, but was largely dominated by Pekarik. He was perhaps Union’s biggest threat in direct play, but didn’t do much. 4.5.

Sebastian Andersson – Couldn’t really impact the game with his aerial presence, as he was contained by the Hertha centre-backs. He was dropped against Bayern to make sure that he wasn’t suspended for this game, but I don’t think that decision has proved fruitful in any way. 3.75.

Julian Ryerson  Couldn’t do much to stop Dilrosun down the Union left. 4.

Team – After a decent first-half showing, where it seemed that their game-plan of frustrating Hertha, forcing them wide and relying on counters and set-pieces for their chances might work, they were completely and utterly dominated in the second half. Collectively, they have a lot of work to do, and it will all begin in what may even be the start of a relegation battle against Mainz on Wednesday. 4.

I had said before that this game was not just a derby, but it would also decide the fates of these two sides. Hertha are now on the up with two wins and two clean sheets under Bruno Labbadia, and are only 5 points away from the Europa League spots. On the other hand, Union may get sucked into the relegation battle, and their midweek fixture against Mainz will prove crucial. From a payers’ perspective, Vedad Ibisevic continues to turn back the years and put in brilliant performances with goals and assists, as Cunha continues to thrive in this rich vein of form that he has found. Things are starting to look good for Hertha.