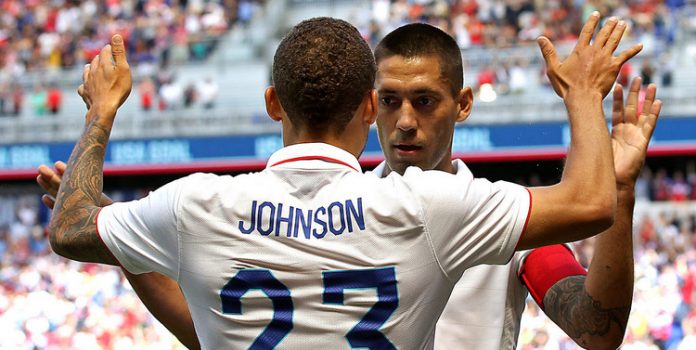 There is a famous quote, usually attributed to Jimmy Greaves, that applies perfectly to the USA’s second pre-World Cup friendly today against Fatih Terim’s Turkey:

“Football is a game of two halves”

The first half in the Red Bull Arena saw the USA showing some very promising teamwork, both attacking and defensively, as well as taking a 2-0 lead into the half-time break. 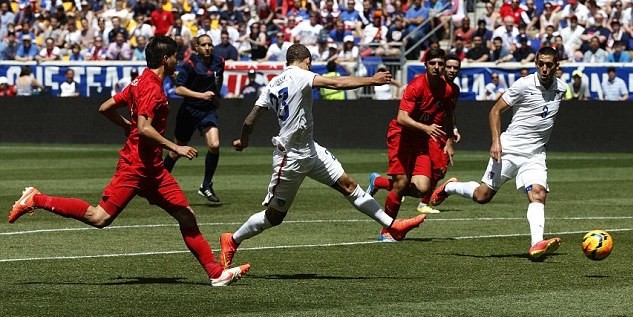 Except for the first 10 minutes, the second half saw the tides turn and Turkey dominated the majority of the remainder of the game. After that, even when USA did break forward they looked blunt at the front and unlikely to add to their two-goal tally, with the substitutions badly effecting the American’s formation, shape and flow.

With a minute left to play, Aston Villa’s Brad Guzan (half-time substitute for Tim Howard) was beaten twice: first by Besiktas striker Mustafa Pektemek, who capitalized on Chandler criminally giving the ball away just outside his own box, and then secondly by Galatasaray midfielder Selcuk Inan who converted the penalty awarded for Geoff Cameron denying Pektemek’s goal-bound shot on the line with his hand.

The referee, in what wasn’t his only bizarre behavior of the game, gave the penalty but did not punish Cameron with even so much as a yellow card. The referee, back from a ban after an incident at the African Cup of Nations, also clotheslined Turkish midfielder Caner Erkin.

The stand out man, certainly not for the first time in Klinsmann’s tenure, was Michael Bradley, who put in a superb performance in the middle of the park. The partnership of Bradley and Jermaine Jones in the center of midfield are two of the most certain bets in the debate of who Jurgen Klinsmann will pick in his starting eleven at the World Cup.

Jones played just ahead of the center-backs, doing a great job of providing cover for their lack of international experience, and allowing Bradley to be a playmaker, constantly spearheading the US attacking opportunities. The Toronto FC new-boy also put through a sublime lay-up for the opening goal; receiving the ball from right-back Fabian Johnson and then chipping it with perfect weight back into the path of the Bundesliga defender, who finished with equally deft skill.

Clint Dempsey doubled their lead early in the second half with a simple tap-in, a real opportunists moment created by the Turkish defense handling Timmy Chandler’s cross very poorly. Michael Bradley again created the opportunity, receiving the ball in his own half and powering forward then feeding Brad Davis, who played a forward ball towards the touchline, for Chandler to run onto. Both goals were excellently worked as a team by the US and showing great promise for their upcoming games against Germany, Portugal and Ghana.

Jozy Altidore’s dry spell still continues, despite him playing all 90 minutes, against an unimpressive Turkish defense and getting some great supply. Altidore had a number of chances but his confidence in front of goal is very telling and the keeper dealt with him easily. He did hit the back of the net early on, but it was ruled out for his push on Kivrak and there was also a hand used by the big man.

The Sunderland striker is drawing comparison’s with ex-England international, Emile Heskey, who also struggled to get on the score sheet a lot and had a similar style and structure to Altidore. Heskey also managed to keep the faith of the manager throughout the baron times, but the fans were lost by him and the fear is that history will repeat itself on the international scene, something that has already begun at Sunderland.

Another player that can be used in a comparison with an England international is Timmy Chandler, who played very much in the style of Glen Johnson. Going forward he was very threatening but his defensive duties were far from good enough for the imminent World Cup games. If he is to be utilized in Brazil, he must sharpen up at the back.

Klinsmann’s decision to drop Donovan was again brought in to question today, with Bayern Munich youngster Julian Green’s performance. The attacking winger has not appeared so much as once for the German outfit but he was still chosen in a 23-man squad that Donovan was left out of. There is no question that Green has potential and talent but he looked well out of his depth even against Turkey, who failed to qualify for Brazil 2014.

This gives much weight to the argument that Donovan would be a great asset to have on the bench, even if Klinsmann doesn’t see him as a part of the starting line-up and also including the fact that this will be Donovan’s final big tournament.

All-in-all, a very positive game for USA, securing the win and looking very competent before they lost their shape with all the changes in the line-up.