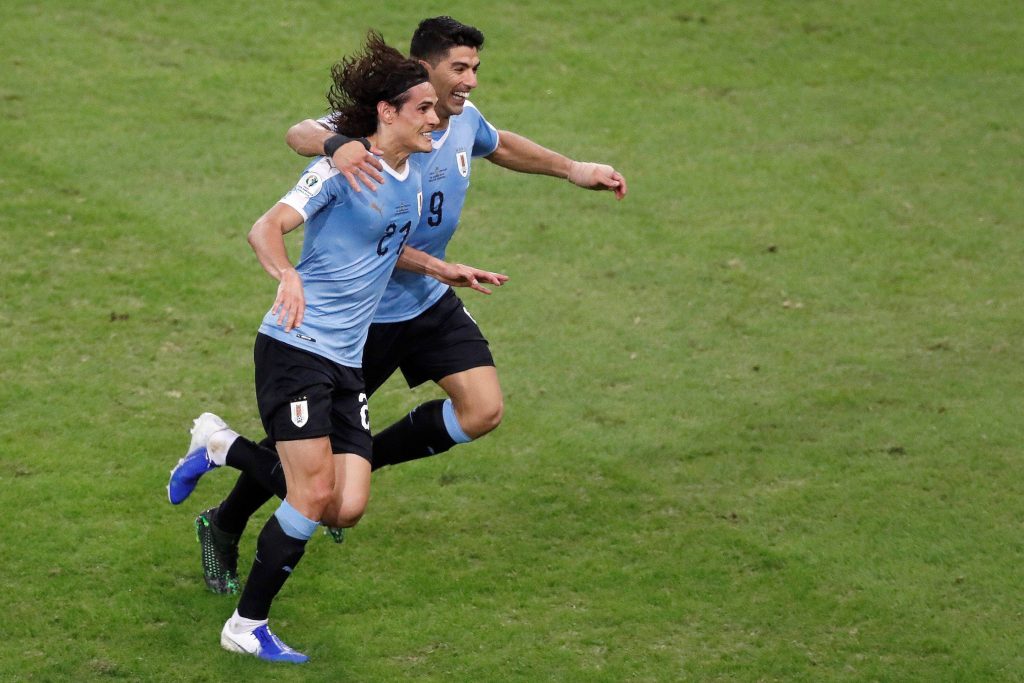 Uruguay and Colombia will battle it out for one of the remaining two places in the Copa America 2021 semi-finals at the Estadio Nacional de Brasilia on Sunday night.

Seeking a record-extending 16th Copa America title and their first since 2011, the Uruguayans picked up steam down the final stretch of the group phase.

Meanwhile, Colombia lost momentum as their Group B journey approached its conclusion and will start this fixture as outsiders.

Since losing 1-0 to Argentina in their Copa America 2021 opener, the Uruguayans have clocked up a three-match unbeaten run in the competition (W2, D1) to progress into the knockout stage as Group A runners-up.

Uruguay’s upturn in form has coincided with Edinson Cavani’s return to the fold, with the Manchester United striker netting in both of his team’s wins over Bolivia and Paraguay, respectively.

Cavani also opened the scoring the last time Uruguay met Colombia in November 2020, with Luis Suarez and Darwin Nunez following up to guide their team to a 3-0 win.

After finding the net in back-to-back matches, Oscar Tabarez’s men are now looking to score in three successive Copa America encounters against CONMEBOL rivals for the first time in a decade.

Interestingly, six of Uruguay’s last seven competitive outings have seen one or both sides fail to get on the scoresheet in matches garnering under 2.5 total goals.

Despite reaching the Copa America quarter-finals for the seventh time in eight appearances, La Celeste have failed to go past this stage in the last two attempts.

Given the importance of the game, Tabarez might opt for a defensive-minded Lucas Torreira to replace Diego De La Cruz, who was indispensable in the group stage.

The Arsenal midfielder has lost his place in the starting line-up following Uruguay’s loss to Argentina on Matchday 1.

Even though they have qualified for the Copa America quarter-finals for the fifth time in a row, Colombia performed well below their standards in the group phase.

Except for a hard-earned 1-0 win over Ecuador in their Group B curtain-raiser, the Colombians failed to win any of their remaining three Copa America 2021 fixtures (D2, L1).

Los Cafeteros go into this meeting on the back of consecutive defeats to Peru and Brazil, both of which came by the identical 2-1 scoreline.

If it turns out that football does follow the script, we may witness a tight, low-scoring affair.

On a positive note, before losing their last two group stage fixtures, Reinaldo Rueda’s side had been on a run of seven consecutive Copa America clean sheets.

Much of the credit for Colombia’s rock-solid defensive displays goes to Everton’s Yerry Mina and Tottenham’s Davinson Sanchez, who have forged a stronghold in front of David Ospina.

But without James Rodriguez in the squad, the Colombians have found the scoring chances hard to come by, as evidenced by a poor return of just six shots on target across their last two Copa America outings.

Since succumbing to a 2-0 loss in a World Cup qualifier back in June 2014, the Uruguayans have gone three H2H meetings with Colombia without defeat (W2, D1).

Despite their faltering scoring form of late, Uruguay can draw confidence from netting 2+ goals in three consecutive encounters against this opposition.

Cavani and Suarez played their part in three of Uruguay’s last five goals against Colombia, and they should spearhead the line here in Brasilia.