For the past one year, hardly a week have passed by, where we didn’t have any story on William Carvalho. The 22-year-old is by far the best midfielder in the Portuguese Liga and has a staggering €45m release clause, so naturally he is bound to create headlines, when several top clubs are showing an interest in him.

Almost all the top clubs in Europe have watched him on several occasions, including Premier League outfits Manchester United, Chelsea and Arsenal. However, following the signing of Nemanja Matic from Benfica, Chelsea’s interest in him died down while Arsenal were never ever going to pay such ridiculous dosh on a youngster. 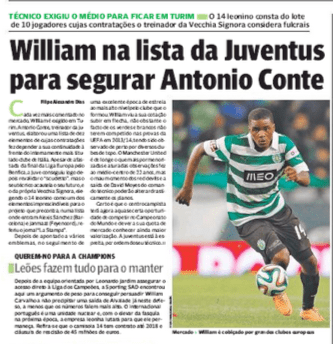 Manchester United were thought to be the only leading candidate for his signature with scouts having watched him on a weekly basis. Sporting however, are reluctant to sell him now. The club have secured Champions League spot this season and they want their star midfielder to stay for another year. Furthermore, Bruno de Carvalho, the Sporting director made it clear he wouldn’t sell the midfielder unless his buy-out clause is met, though several British media outlets reported that United already had agreed a deal, which we can confirm is untrue.

Today O Jogo reports, Juventus have joined the race for his signature as well. Antonio Conte made a list of 10 signings upon which his stay at Juventus will depend, it includes Janmaat, Alexis Sanchez and Carvalho.

After an incredible season at Sporting, William has generated interested from pretty much all of Europe, with United being by far the club who observed him the most/closest, but after enduring a bad season where they will miss Champions League next campaign and David Moyes’s exit might chance the plans.

William will almost certainly have the chance to further increase his value at the World Cup, Juventus have been instructed by Conte to keep a close eye on him.

It is highly unlikely that Juventus will dish out €45m for Carvalho, but question remains, will United continue to monitor him under their new manager?