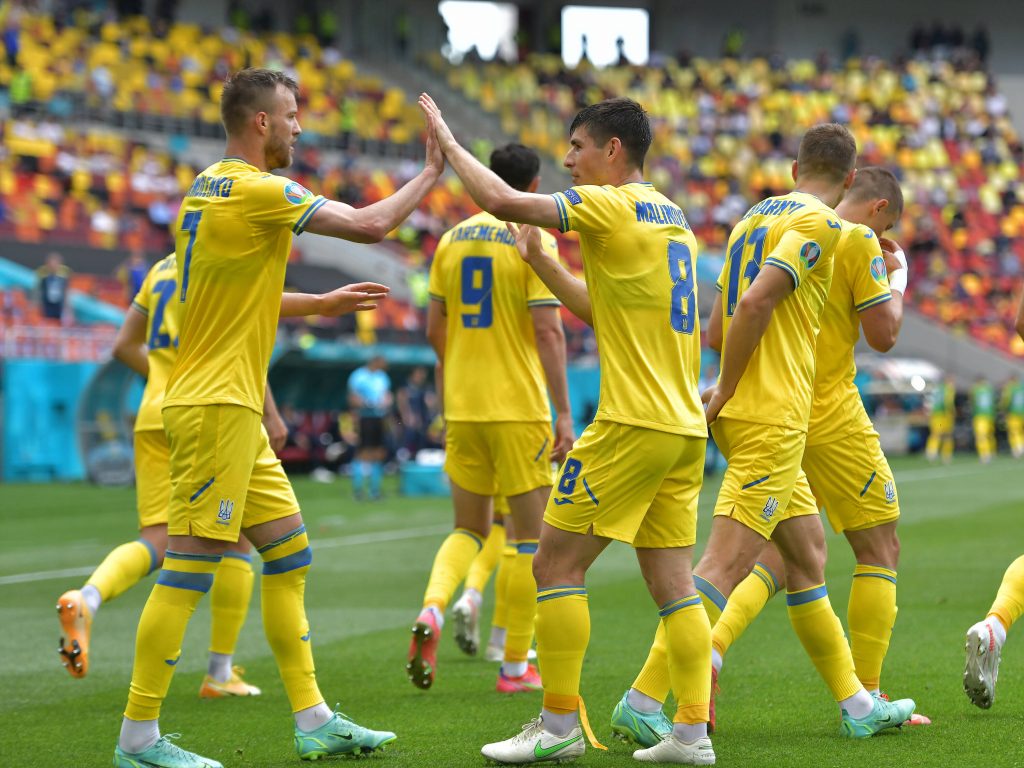 Ukraine took their first three points of Euro 2020 from a tight encounter with North Macedonia on Thursday.

Ruslan Malinovskiy had a shot from range turned wide, and Andriy Yarmolenko poked wide from the resulting corner.

Moments later, Roman Yaremchuk beat defender Darko Velkovski with an excellent turn to go through on goal, but saw his square ball cut out by a last-ditch tackle by Stefan Ristovski.

Ukraine continued to apply pressure, and made the breakthrough in the 28th minute. Malinovskiy’s corner was flicked on by Oleksandr Karavaev at the near post, falling perfectly for Yarmolenko to tap in.

And it wasn’t long before they doubled their lead. Yarmolenko this time turned provider, slipping a ball through to Yaremchuk.

North Macedonia’s defence fell asleep, and the forward tucked in at the near post for his second goal of the tournament.

North Macedonia had very little in the way of clear cut chances. Eljif Elmas missed the target from Boban Nikolov’s cross, and Goran Pandev had a delightful finish ruled out for offside, but that was pretty much it.

The second half was very different, with North Macedonia instantly coming out fired up. Right at the start of the half, Arijan Ademi had a great chance to pull one back after some brilliant link-up play with Pandev, but Georgi Bushchan managed to turn it wide.

And they managed to halve the deficit not long after. Substitute Aleksandar Trajkowski’s shot was excellently tipped onto the crossbar by Bushchan, but it fell to Pandev, who was fouled by Karavaev.

Ezgjan Alioski’s first effort from the spot was saved, but he followed up to slam home the rebound.

Ukraine managed to have some chances in the second half, and Malinovskiy was at the heart of everything.

Firstly, he saw his free-kick from a tight angle well saved, and then he had another effort denied after Karavaev’s cutback.

Then he created another opportunity, this time for Viktor Tsygankov, but the winger’s finish was way off target.

With less than ten minutes remaining, Ukraine had the chance to finish the game off when Malinovskiy’s free-kick was handled by Daniel Avramovski.

A penalty was awarded after a VAR monitor check – the first time the screens have been used at the tournament.

However, Stole Dimitrievski dived to his right to deny the Atalanta midfielder a goal to cap off a fine performance.

North Macedonia went into the final stages needing a goal, but were unable to find a way through the Ukraine defence, ensuring that the game finished 2-1.

The defeat leaves North Macedonia needing a win against Netherlands to stand any chance of progression.

Meanwhile, Ukraine go into their final game with Austria knowing that a point should be enough to see them through.

Georgi Bushchan (7/10) – Made a fair few saves in the second half, including a penalty. Unlucky with the goal.

Oleksandr Karavaev (6/10) – Looked good going forward and pulled out a nice flick for Yarmolenko’s goal. Conceded a penalty with a careless challenge.

Illia Zabarnyi (6/10) – Came under some pressure in the second half, but coped fine.

Mykola Matvienko (6/10) – Sometimes found it difficult to deal with Pandev up front.

Vitaliy Mykolenko (6/10) – Didn’t let a whole lot get past him down his side. Didn’t offer much going forward.

Mykola Shaparenko (6/10) – Showed some quality down the left but wasn’t effective enough. Booked just before half time for a dive.

Taras Stepanenko (6/10) – Played his part in the first half, but went quiet afterwards.

Oleksandr Zinchenko (6/10) – Helped dominate the first half, but failed to maintain control after the break.

Andriy Yarmolenko (8/10) *MOTM* – A fine performance from the West Ham winger. Scored a goal, got an assist, and always looked threatening.

Roman Yaremchuk (7/10) – Made things very difficult for the North Macedonian backline. Took his goal well. Quiet in second half before being substituted.

Ruslan Malinovskiy (8/10) – Involved in everything going forward for Ukraine. Set-piece delivery was quality every time. Cost himself MOTM with the penalty miss.

Stole Dimitrievski (7/10) – Made some decent stops and denied Malinovskiy from the spot. Often seemed afraid to catch crosses.

Boban Nikolov (5/10) – Didn’t do much to stop Ukraine’s first-half dominance. Subbed at half time.

Darko Velkovski (4/10) – Had a really tough game up against Yaremchuk. Completely switched off for the second goal.

Visar Musliu (5/10) – Part of a backline that allowed Ukraine to have a lot of chances.

Ezgjan Alioski (6/10) – Struggled in the first half against Yarmolenko. Penalty wasn’t great, but reacted quickly on the rebound.

Arijan Ademi (6/10) – Had one good chance after some nice link-up play with Pandev. A solid performance.

Stefan Spirovski (5/10) – Unable to have any impact on the game. Subbed off at half time.

Eljif Elmas (6/10) – Didn’t do enough to help Pandev up front. Had some nice touches.

Goran Pandev (7/10) – Always looked like the most likely to produce something. Won the penalty with some sharp play.