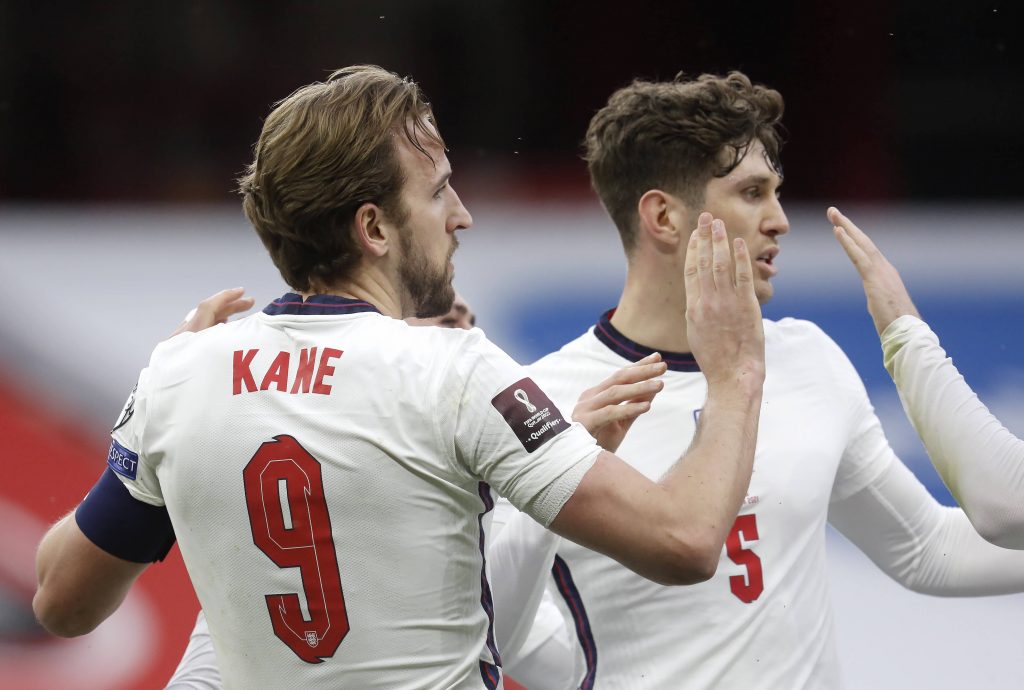 England made it six points from a possible six in 2022 World Cup qualification with a 2-0 victory away in Albania.

A second-half strike from Mason Mount added to a first-half header by captain Harry Kane to secure a second win in three days for Gareth Southgate’s side.

Following on from Thursday night’s 5-0 triumph over San Marino at Wembley, Southgate made six changes upon arrival in Albania, including Kane’s return, looking to maintain an unbeaten record in World Cup qualification, which has lasted since 2009.

England – playing in their all-white home kit – lined up as follows:

Meanwhile, hosts Albania came into the encounter on the back of their best form in 11 years, unbeaten in their last six matches.

They were facing the Three Lions for the first time since September 2001 and are vying to qualify for the World Cup for the first time in the nation’s history. Previously, Albania have only made it through to one major international competition – Euro 2016.

Head Coach Edoardo Reja made four changes from their 1-0 win against Andorra on Thursday, with a starting 11 including Slough-born forward Armando Broja.

Played behind closed doors due to the ongoing Coronavirus Pandemic, the game started as a cagey affair.

Albania knew that they would have to maintain good organisation if they wanted to come away with anything and defended resolutely to prevent the visitors from having any chances of note in the opening stages.

In fact, it was they who would fire the first shot in anger. England gave the ball away sloppily in midfield and were left wide open to a counter-attack.

Myrto Uzuni was accordingly slipped through on goal but failed to trouble Nick Pope as his strike rose over the crossbar without the need for a save. A big let-off for the Three Lions.

Southgate’s side really struggled to break down their opponents but were presented with their first real opportunity 20 minutes in, a free-kick within close-range of goal following a crunching challenge on Mason Mount.

Captain Kane stepped up to take the set-piece but fired the ball straight at teammate Harry Maguire, who was positioned in the wall to distract the Albanian defence. No danger to the home goal just yet.

Kyle Walker then fired a speculative effort from range. Walker has never scored an international goal in over 50 appearances, but this strike wasn’t going to put a stop to that record as goalkeeper Etrit Berisha gathered comfortably.

Soon after though, England did manage to take the lead and their pressure eventually paid off through Kane, who netted his first international goal in 500 days and a first in seven appearances.

Raheem Sterling cut the ball back to Luke Shaw – making his first start for England since 2018 – and the full-back floated a superb ball into the area which Kane managed to reach and head home, putting his side in the lead.

Now with the advantage, England and Kane should have had a second before the half-time whistle came. Sterling once again involved crossing the ball to the back post for Kane to run on to.

The Tottenham man smashed the ball on the half-volley and had Berisha beaten but hit the underside of the crossbar and saw his effort bounce away from any danger. It was a missed opportunity to double their advantage, but England headed in 1-0 up at the break.

Unlike against San Marino, Southgate opted not to make any half-time substitutes, perhaps because he knew the job wasn’t yet done this time around.

Phil Foden agonisingly nearly made it two and could have put the game to bed within the first ten minutes of the restart had it not been for a great save.

Club team-mate Sterling stood his man up in the box and dragged the ball back for Foden to have an effort at goal.

Foden did everything right and aimed his shot towards the bottom left corner of the net, but Berisha somehow changed direction and got his fingertips to the ball to tip it onto the post.

Another youngster would ultimately seal the three points for Southgate’s side, with Mount coolly doubling England’s lead after 63 minutes.

Like San Marino, Albania tried to play the ball out from the back and were cruelly punished for it as Sterling intercepted a stray ball in the final third and moved the ball onto Kane, who slid Mount in on goal.

The Chelsea forward calmly slotted the ball around the ‘keeper for his fifth international goal to make it 2-0 to the visitors.

From then on, it was a case of damage limitation for the home side who rarely threatened. Southgate made his substitutions sparsely to give individuals more game time, including James Ward-Prowse and Jesse Lingard, replacing Kalvin Phillips and Foden respectively.

Kane almost added a third as Sterling put the ball across for him to tap into an empty net, but he lost the footrace to two defenders and was booked for his challenge in trying to prod home.

His strike in added time was also deflected behind for a corner, but it wasn’t a hugely entertaining watch in the closing stages.

Nevertheless, another three points onto the qualification group table for England and positives to take from the match once more.

Nick Pope became the first-ever goalkeeper to keep a clean sheet in their first six appearances for England – the Burnley shot-stopper is yet to concede an international goal in over 500 minutes of action.

Equally, the side made it nine clean sheets in 13 games and added to their record against Albania to make it five wins from five.

Southgate’s side are hoping to qualify for a seventh World Cup in a row for the first time and have made a good start in their challenge to do so with two wins from two.

Poland travel to Wembley on Wednesday evening – March 31 – for the final fixture in this international break and will pose England’s sternest test in the group thus far.