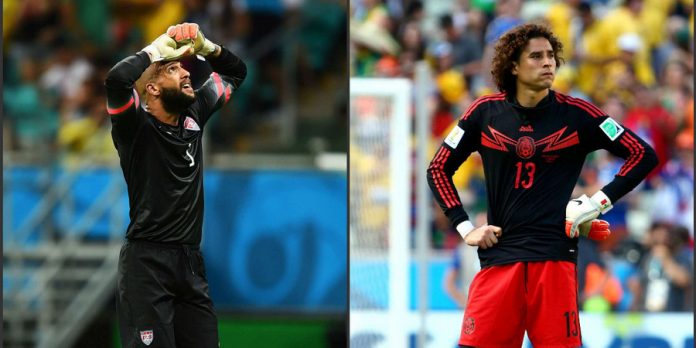 USA goalkeeper Tim Howard and Mexico shotstopper Guillermo Ochoa have been left out of the three-man shortlist for the coveted Golden Gloves award for best keeper of the World Cup.

Everton man Howard was in inspirational form throughout the tournament for the unfavoured USA, helping them traverse arguably the group of death (Ghana, Germany, Portugal), while he also broke the record for the number of saves in a single match, with the 35-year-old saving a stunning 15 shots in the 2-1 second round defeat to Belgium.

Ochoa, meanwhile, also had an exceptional tournament, with his showing against Brazil in the group stage the real highlight; stopping the Selecao (who had a rampant Neymar in their ranks) almost single-handedly, the 28-year-old played a huge part in securing a crucial 0-0 draw with the hosts.

Twitter exploded upon the release of the list, with football fans everywhere stunned that FIFA could leave out both keepers from the final three. Germany’s Manuel Neuer, Argentina’s Sergio Romero, and Costa Rica’s Keylor Navas made the cut, with fans questioning Romero’s appearance, despite his semi-final heroics in the shootout win against the Netherlands.

Nah..2 made saves and won,others made saves and lost “@itzpablobreezy: I say Howard and Ochoa deserve a place in that golden gloves list ahe — Kay (@koleeP) July 12, 2014

Ochoa yes, Howard no RT @Coolkidamas: “@itzpablobreezy: I say Howard and Ochoa deserve a place in that golden gloves list ahead of Romero

What do you think? Should Howard have made the final three? Should Ochoa?