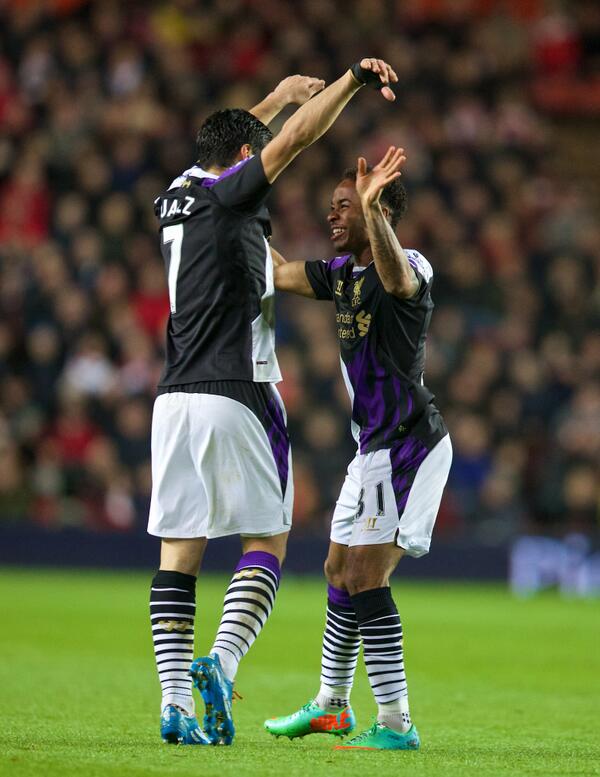 Liverpool moved second in the Premier League table after the Reds earned an emphatic 3-0 victory over Southampton at the St. Mary’s.

As a result of this victory, Liverpool are now second in the table behind Chelsea, and are trailing by just four points, with 10 games left.

Luis Suarez, the top scorer in the Premier League, opened the scoring for the Reds in the 16th minute of the match, though he was bit fortunate to get the ball in the box, in the build-up to the goal.

The home side responded strongly and created very good chances, but the Reds defence stayed resolute. After the break, Rodgers introduced Raheem Sterling in place of Coutinho and the England international made an instant impact, giving the Reds a healthy 2-0 lead.

Suarez was involved again in that move as this time he bagged an assist for himself. In the dying seconds of the match, the Uruguayan earned a penalty which skipper Steven Gerrard duly converted.

After the match, Liverpool players, fans and journalists shared their feelings on twitter. We take a look at some of them.

Great win and solid performance from the lads. #Massive3Points

What a performance from the team today! Massive shout to all the fans who were behind us for the full 90 minutes today! #likealways #YNWA

Jhheeeezzz!!! What a win!! Great team victory. 10 cup finals for us until the end of the season. #ynwa #redordead

Liverpool have now beaten every league opponent over two legs they’ve played home and away this season.

Massive win today pushes LFC ahead of Arsenal. While every match feels critical, today’s clean sheet made it fun to watch

3 points! 3 goals! A clean sheet! A quite brilliant away result at Southampton as the impressive form continues for Liverpool.

‘We’re going to win the league’ from the away end. They believe. #LFC moving up to 2nd and back to within 4pts of leaders Chelsea.

Sterling comes on and scores immediately. A touch of silver.